Dr Mansukh Mandaviya, Union Minister of Health and Family Welfare stressed on the importance of collaborative efforts for enhancing awareness among communities regarding hearing disorders and hearing impairment. He stated that "With Jan Bhagidari and Jan Andolan, everyone can effectively contribute to adding to the existing knowledge among communities regarding benefits of early identification, and timely treatment of hearing disorders". When left undetected and untreated, hearing ailments can transform into disabilities thereby adversely impacting the productivity and quality of life of many.  He was addressing the 10th anniversary of World Hearing Day celebrations at Dr. Ambedkar International Centre in the presence of Dr. Bharati Pravin Pawar, Union Minister of State for Health and Family Welfare, here today. The theme for this year's World Hearing Day is "To hear for life, listen with care" 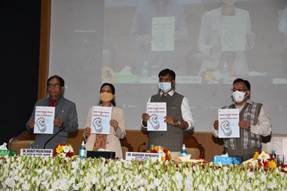 The Union Health Minister acknowledged the crucial role of ASHAs and ANMs, Doctors, NGOs, nurses in creating awareness in this regard. He urged them to further educate the communities and parents of young children for early screening and identification of hearing impaired. He also cautioned everyone that "We should not self-medicate, but consult with doctors and proper caution should be taken before taking any medication related to hearing problems."  He also stated that in the modern age of technological growth, almost all causes of hearing loss including exposure to loud sounds can be prevented and treated. Use of technology can be a game changer in achieving this, he added.

He highlighted the commitment of the Government towards healthcare of the elderly. The Union Minister pointed out, "The elderly and children are being given the priority for treatment of hearing loss. The Government is committed towards the welfare of all people and especially the elderly." He also informed that the Union Ministry of Health and Family Welfare already has a programme dedicated to addressing the various health related problems of the elderly called the "National Programme for the Health Care of Elderly" (NPHCE).

The Union Minister virtually inaugurated Neonatal Hearing Screening Facilities for hearing impaired at AIIMS and 11 Outreach Service Centre (OSC) , All India Institute of Speech and Hearing (AIISH), Mysore. He also released a book of guidelines for Hearing and Screening for children and elderly along with the last two years screening report for newborn, school going and adults.  While releasing the guidelines, the Union Health Minister highlighted that more than 1 lakh infants per year in India are diagnosed with hearing problems. He further added, "This shows it is an emerging challenge. These guidelines would benefit various age groups and hence, must be promoted. With the launch of Neonatal Hearing Screening Facility, AIIMS, New Delhi and Eleven (11) OSC AIISH, Mysore, capacity for screening, early identification and prevention will immensely increase."

Dr Bharati Pravin Pawar, Minister of State of Health and Family Welfare said that the World Hearing Day reminds us of our responsibilities towards the hearing impaired. She stressed on importance of pregnant women and mothers being aware of this issue and take treatment for their children with any hearing impairment at the earliest.

The Union Health Secretary, Shri Rajesh Bhushan said that the India's first programme related to hearing problem- National Programme for Prevention and Control of Deafness (NPCCD), started in 2006 under NHM has three pillars:

Training of professionals at all levels, including ASHA workers, ANMs, GDMOs and ENT Surgeons etc.

It is to be noted that the entire event was translated live into sign language by Ms. Deepali, a young student from the Indian Sign Language Research and Training Center ( ISLRTC). It was widely appreciated by the Hon'ble Ministers, dignitaries and the attendees.

Senior officers of Union Ministry of Health and Family Welfare along with officers and experts from AIIMS, Dr RML Hospital, NCDC, DGHS etc., were present at the event.