With the administration of 78,66,950 vaccine doses in the last 24 hours, country’s COVID-19 vaccination coverage surpassed the cumulative figure of 75.22 Crore  on Monday as per reports  from Union Health Ministry. 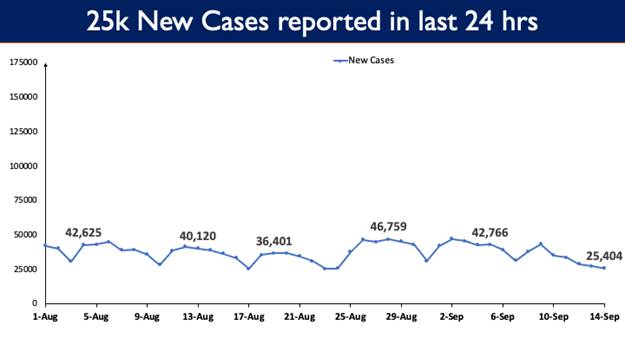 According to the Ministry, India has also become home to more than 99 per cent healthcare workers and frontline workers vaccinated with one shot of COVID-19 vaccine.

Meanwhile, 25,404 new cases were reported in the last 24 hours. The recovery of 37,127 patients in the last 24 hours has increased the cumulative tally of recovered patients (since the beginning of the pandemic) to 3,24,84,159. Consequently, India’s recovery rate stands at 97.58%.Sustained and collaborative efforts by the Centre and the States/UTs continue the trend of less than 50,000 Daily New Cases that is being reported for 79 consecutive days now.

The Active Caseload is presently 3,62,207. Active cases presently constitute 1.09% of the country's total Positive Cases. The testing capacity across the country continues to be expanded. The last 24 hours saw a total of 14,30,891tests being conducted. India has so far conducted over 54.44 Crore cumulative tests.

Kerala, which turned out to be a COVID epicenter recently, has also started showing declining trends and has reported a decline of nearly 20 per cent in terms of daily caseload in the past week.