Professor T Govindarajufrom Jawaharlal Nehru Centre for Advanced Scientific Research, an autonomous institute under the Department of Science & Technology, Govt. of India, has received the prestigious Shanti Swarup Bhatnagar Prize for Science and Technology, 2021 for his ground-breaking concepts and discoveries, which have significant potential for diagnosis and treatment for Alzheimer’s, lung cancer among other health problems. His innovative work on small molecules, peptides, and natural products offers both diagnostics as well as therapeutics, leading to personalised medicine. 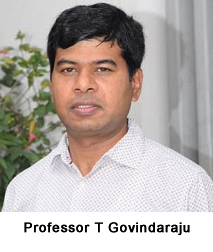 Hailing from a remote village in Bangalore Rural District, Prof. Govindaraju first brushed with neuro-generative diseases during school days when he witnessed insensitive treatment of patients with mental illness, which played a major influence in the choice of his research area.

“During my childhood days, it was common to equate mental illness to aging, thereby neglecting patients and even denying any treatment. Sadly, I saw similar treatment meted out to patients while I was pursuing my higher education in big cities. These observations inspired me to take up research in neurosciences when I started my independent research career,” he recalls.

After completing Ph.D. from CSIR-NCL and post-doctoral fellowship in leading research institutes in  USA and Germany, Prof. Govindaraju’s research focussed on bioorganic and chemical biology is addressing unresolved problems related to human health – neuro-degenerative diseases as well as cancer, directly benefitting the society.

Prof. Govindaraju’s persistent research efforts over the last 10 years paid off earlier this year. He has discovered a novel drug candidate molecule (TGR63), which effectively reduces the burden of toxic protein aggregation species called amyloid in the brain affected by Alzheimer’s disease and reverses cognitive decline in animal models. A pharmaceutical company has picked this molecule for clinical trials, which shows excellent promise to treat Alzheimer’s disease in humans.

His pioneering work on molecular tools selectively detect Alzheimer’s disease and differentiate it from other neurodegenerative diseases. Prof. Govindaraju has also set up a company – VNIR Biotechnologies Pvt Ltd (https://vnir.life/)- to develop NIR, PET, and retina-based platforms for early diagnosis of Alzheimer’s. This four-year-old firm has been recognised by one of the promising biotech companies from India and has been featured in international media.

“I was keen to tread the unbeaten path in the field related to human health. The fact that neuro-diseases such as Alzheimer’s did not have effective methods of early diagnosis or cure led me to choose this field. I hope my contributions and research will pave the way for early diagnosis as well as treatment,” Prof. Govindaraju elaborated.

His interest in understanding the relationship between Alzheimer’s disease and cancer resulted in the discovery of the first small molecule-based drug candidate (TGP18) for lung cancer, one of the difficult types for early detection and treatment. Fascinatingly, this molecule can also function as a diagnostic tool and is one of the few molecules globally to be classified as “theranostic” (diagnostic therapy) candidate. Prof. Govindaraju is taking forward translational efforts on this.

His research on silk-derived formulations have a far-reaching impact on human health, ranging from controlled insulin delivery, diabetic wound healing, skeletal muscles to stem cell-based neuronal tissue engineering to treat Alzheimer’s disease. These silk-based innovations can provide a fillip to the sericulture industry and farmers.

Besides visiting faculties at leading universities in the USA, Europe, Australia, and Japan, Prof. Govindaraju is passionate about improving the quality of education in rural schools and has been involved in outreach initiatives. He is also creating awareness about mental illness among school children in Karnataka and other states.