In the first ever cycle rally organised at the India International Trade Fair, Dr. Mansukh Mandaviya, Union Minister of Health and Family Welfare today cycled to inaugurate the Health Pavilion to generate awareness and promote a healthy active lifestyle in view of the rising burden of NCDs in the country. He was joined by senior officers of the Health Ministry including DrBalram Bhargava, DG, ICMR, ArunSinghal, CEO, FSSAI, DrDharmenderGangwar, Additional Secretary VikasSheel, Additional Secretary and Managing Director of National Health Mission Lav Agarwal, and Joint Secretary Vishal Chauhan. 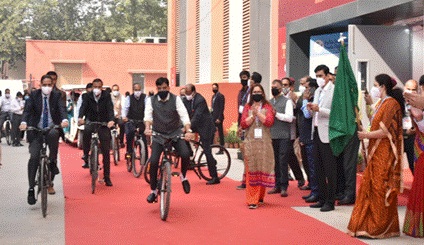 The theme of this year’s Health Pavilionat the 40th IITF at PragatiMaidan is to create awareness about Non-Communicable Diseases (NCDs), also called lifestyle diseases, and project importance of total health.

Speakingat inaugural of the Health Pavilion at ITF2021, Union Health Minister Dr Mansukh Mandaviya announced a month long campaign as part of "AzadiKaAmrutMahotsav" to create awareness about preventive health. “During this month long campaign, we have set ourselves a target of conducting 7.5 lakh Wellness Sessions and 75 lakh NCD screenings across the country though the Ayushman Bharat Health & Wellness Centres. Early screening will aid in timely identification of diseases. This is part of the overarching concept of Total Health, which is comprehensive including preventive and promotive health”, he stated. “The Fit India, Eat Right India,Khelo India, and yoga form part of the “Total Health” vision of Hon. Prime Minister which will lay the foundations for a healthy and productive New India”, he added.

Speaking on India’s COVID19 nation-wide vaccination drive, he stated, "Under the guidance of Hon. Prime Minister, "Jan Bhagidari" has played a very critical role in India's fight against COVID."Hehighlighted the achievements of the country in the high vaccination coverage. He expressed gratitude for the media in creating awareness against rumours, misinformation and removing hesitancy. "We have achieved 113 cr vaccination doses administration with the support of various stakeholders", he stated. He also spoke on the Ayushmann Bharat Health Infrastructure Mission launched recently by Prime Minister Shri Narendra Modi to deal with any future pandemic and improve health infrastructure. “Rs. 64,000 crores have been sanctioned by the Govt of India with the aim that every district will be covered to strengthen health Infrastructure of the country,” he said.

The Union Health Minister spoke about partnership with the private sector in providing healthcare. "Competition will help in providing affordable prices", he stated.