Vaccines for children and Nasal Vaccine under trial: PM

Prime Minister Narendra Modi, while addressing the nation on Monday evening, announced that the Centre would provide will free COVID-19 vaccines to all the citizens and said vaccines for children are under trial along with nasal vaccine. 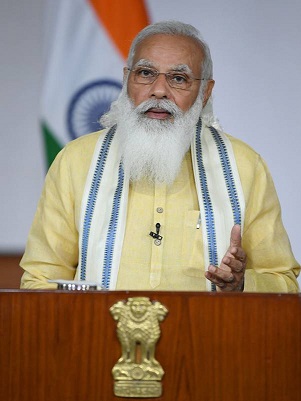 As many states came forward with a demand for reconsideration of the vaccination strategy and for bringing back the system that was there before 1st May, the Prime Minister announced that it has been decided that the 25 per cent vaccination that was with states will now be undertaken by the Government of India. This will be rolled out in two weeks. In two weeks, centre and states will make necessary preparations as per new guidelines.

In another major announcement, the Prime Minister conveyed the decision of extension Pradhan MantriGaribKalyan Anna Yojna till Deepawali. This means that till November, 80 crore people will continue to get decided amount of free food grain every month. During the pandemic, the government is standing with the poor for all his needs as his friend, said the Prime Minister.

Recalling the unprecedented rise in the demand for the medical oxygen during the second wave during the months of April and May, the Prime Minister said that the challenge was met at the war footing deploying all the systems of the government. In the history of India, this level of demand for medical oxygen was never experienced, said Shri Modi.

The Prime Minister said that globally, vaccine producing companies and countries are far less than what is the global demand for the vaccines. In such a scenario, made in India vaccine was critical for India. The Prime Minister, pointed out that in the past, India used to get vaccines decades after they were developed abroad. This always resulted in a situation in the past where India could not even start vaccination while other countries used to finish the vaccine work. Shri Modi said that by working in mission mode, we raised the vaccination coverage from 60 per cent to 90 per cent in 5-6 years. We not only enhanced the speed but also widened the ambit of vaccination, said the Prime Minister,

This time, said the Prime Minister, India warded off all the apprehensions and, through clean intentions, clear policy and constant hard work, not just one but two made-in-India vaccines for COVID were launched in India. Our scientists proved their calibre. Till today, more than 23 crore vaccine doses have been administered in the country.

Prime Minister, dwelled on the differing views from various quarters on the vaccination drive. As the corona cases started declining, questions arose about the lack of choice for states and some people questioned why the central government is deciding everything. Flexibility in lockdown and one-size-does-not-fit-all type of argument were forwarded.

Industry bodies have termed the Prime Minister’s announcements as welcome move. Uday Shankar, President, FICCI said, "FICCI was advocating a centralized approach to vaccination and this announcement will remove the confusion and accelerate the process of vaccine procurement. The decision by the PM to let the private sector continue with procuring 25 percent vaccine and administer with a cap of Rs 150 on service charge brings in clarity. Going forward, logistics costs may need to be factored in case of those vaccines which require extensive cold chain logistics. It is very encouraging to note PM’s assurance of more vaccine supply in the near future with particular mention of two more vaccines in the pipeline, seven more firms in process of making vaccines, efforts to get vaccines from abroad and trial for nasal vaccine.”

"Prime Minister’s address to the nation has provided a clear direction to India's vaccination programme with an avowed objective of providing free jabs to all adults, while providing a window for those willing to pay through private sector hospitals. The revised policy would remove all procedural bottlenecks for availability of vaccines to the states," ASSOCHAM Secretary General Deepak Sood said.