There have been several statements from some States and political representatives regarding shortage and slow availability of COVID vaccines in the country. In a series of tweets today, Union Minister of Health and Family Welfare Mansukh Mandaviya has debunked these allegations and myths, stating that such statements are not based on facts and intend to create panic among the people. 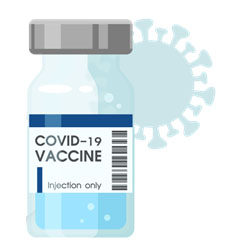 The Union Health Minister stated that the prevailing situation can be better understood by an analysis of the prevailing situation based on evidence and facts. To enable vaccination through Government and Private hospitals, 11.46 crore vaccine doses were made available to State governments and Union Territories in June 2021 by Union Ministry of Health and Family Welfare. This availability has been increased to 13.50 crore doses in the month of July, he said.

Based on the discussion with the manufacturers, the Union Ministry of Health and Family Welfare had informed all States/UTs on June 19, 2021, regarding number of doses of the vaccine to be made available to States/UTs in month of July. Subsequently, on June 27 and July 13, the States were also informed in advance about the availability of vaccines every day for the first and second fortnight of July 2021. This was done so that States are aware of the time and quantity of doses and thereby plan the vaccination drive in a better and effective manner at the State/District level. The States/UTs have been advised to plan their COVID -19 Vaccination sessions based on the availability of the COVID vaccines so that people of the country do not face any problem.

The Union Health Minister also stated in his tweets that despite giving advance information to the States on the vaccine availability, if mismanagement and long queues of vaccination beneficiaries are being seen, it is clearly evident what the real issue is and who is responsible for this state of affairs. Shri Mansukh Mandaviya further advised that persons who are making statements in the media, that are creating misinformation and panic in the people, need to introspect whether they have distanced themselves so much from governance processes and the related information being given to them, that they are not even aware of the correct advance information been provided regarding availability of vaccines.

Meanwhile, Union Health Ministry also emphasized that India has a robust system of recording Covid-19 deaths. There have been some speculative media reports claiming higher fatality figures due to COVID-19 based on data from National Health Mission’s Health Management Information System (HMIS). The report compares data from the Civil Registration System (CRS) and HMIS to draw erroneous inferences. Such reports are conjectures and speculation without any substantial basis.

Citing the death numbers reported in the HMIS, the media report goes on to say that “In the absence of other information, these deaths should all be considered as Covid-19 deaths”. As per the media report itself ‘over 2,50,000 deaths were from causes not known’. Attributing any death to COVID-19 without any basis than based on empirical data is fallacious and such inferences are mere figments of imagination.

The Ministry clarified that the Union Government has been transparent in its approach to COVID data management and a robust system of recording all COVID-19 related deaths already exists. All States and Union Territories have been entrusted with the responsibility to update the data in this particular system on a continuous basis.  In order to avoid inconsistency in number of deaths being reported, Indian Council of Medical Research (ICMR) has issued ‘Guidance for appropriate recording of COVID-19 related deaths in India’ for correct recording of all deaths as per ICD-10 codes recommended by World Health Organisation (WHO) for mortality coding.

States and UTs have been urged through various formal communications, multiple video conferences and through deployment of Central teams for correct recording of deaths in accordance with the prescribed guidelines. Union Health Ministry has also regularly emphasized the need for a robust reporting mechanism for monitoring district wise cases and deaths on a daily basis.