No option to pick & choose between Covishield and Covaxin

As India begins with the mammoth vaccination drive with Oxford-AstraZeneca’s Covishield and Bharat Biotech’s Covaxin, recipients will not have an option to choose which vaccine they want to be inoculated with. 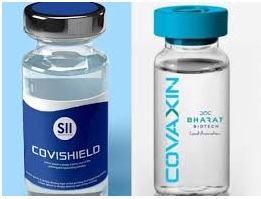 Covid vaccination in the country is voluntary though whether healthcare and frontline workers have such an option could be a matter of rules. The health ministry outlined the dosing pattern and said there will be a gap of 28 days between two doses of vaccine and its effectiveness will begin 14 days after the second dose.

Both Covishield and Covaxin are being locally manufactured by Pune-based Serum Institute of India (SII) and Hyderabad-based Bharat Biotech and have been tested on thousands of people and are the safe.

“We should have no doubt that the two vaccines approved are the safest of the vaccines. Both the vaccines have been tested on thousands of people and side-effects are negligible. There is no risk of any significance,” said Dr V K Paul, NITI Aayog member-health.

The four major regional depots for vaccines, Delhi, Chennai, Kolkata and Hyderabad, received their quantum of Covishield doses within 10 hours since their dispatch began from the SII premises.

Covaxin doses are expected to reach Hyderabad airport from where they will be shipped to 11 destinations across the country, including Delhi, Bengaluru, Chennai, Patna, Lucknow and Jaipur.

The National Immunisation Day (NID), commonly known as Pulse Polio Immunisation programme, was scheduled for January 17 across India to ensure that the nation maintained overall immunity levels against polio virus.

However, the country is all set launch its Covid-19 vaccination drive from January 16 in what Prime Minister Narendra Modi has called the world's largest inoculation programme with priority to be given to nearly three crore healthcare and frontline workers.

The Union Health Ministry through a letter on January 9, communicated the decision to defer the polio immunisation programme to all states. "This is to inform that due to unforeseen activities, it is decided to postpone the scheduled Polio NID (National Immunisation Day) round from January 17, 2021 till further notice," according to the letter sent to the Principal Secretary in the Health department of all states.