India achieved a significant milestone in its fight against the global pandemic as it became the fastest country in the world to reach the 4 million COVID19 vaccination mark in just 18 days.

As on 1st February, 2021, India was among the top five countries in terms of number of COVID19 vaccine doses administered to people. India continues to undertake its vaccination drive at a fast pace. 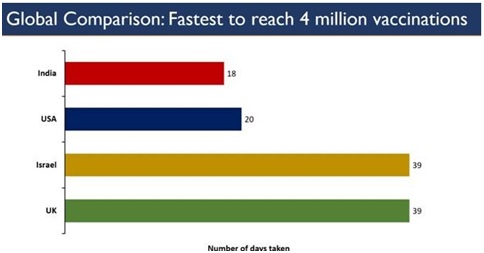 11,039 new confirmed cases were recorded in the last 24 hours in the country, 14,225  new recoveries were registered in the same period. It has led to a net decline of 3,296 cases from the total active caseload.

Currently India’s Recovery Rate has crossed 97.08% and is one of the highest in the world for countries with high caseload. As recoveries continue to outnumber new Covid 19 cases, total recovered cases have crossed 1,04,62,631.

The gap between active cases and recoveries keeps widening and presently stands at 1,03,02,574 with a considerable decline in mortality rate as more number of people are responding to medication and are recovering quickly.

85.62% of the new recovered cases are from 8 States/UTs. The state with highest number of recoveries is Kerala with 5,747single day recoveries followed by Maharashtra with 4,011new recoveries and Tamil Nadu with 521 recoveries.

However new confirmed cases have been reported in the last 24 hours in the country and 83.01% of these new cases are concentrated in six States/UT. Kerala is leading the number of new active cases with 5,716 cases followed by Maharashtra and Tamil Nadu with 1,927and 510 new cases each respectively.