Among the Larger States, Kerala, Tamil Nadu and Telangana emerged among the best three performers in terms of overall performance on healthcare parameters, according to the fourth edition of the State Health Index for 2019–20, released by NITI Aayog on Monday.  The report, titled “Healthy States, Progressive India”, ranks states and Union Territories on their year-on-year incremental performance in health outcomes as well as their overall status. 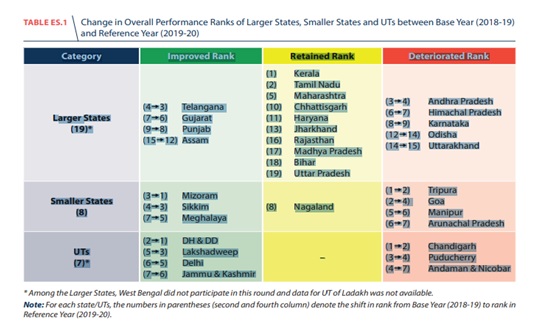 Round IV of the Report focuses on measuring and highlighting the overall performance and incremental improvement of states and UTs over the period 2018–19 to 2019–20.

‘Our objective through this index is to not just look at the states’ historical performance but also their incremental performance. The index encourages healthy competition and cross-learning among States and UTs,’ said CEO Amitabh Kant.

Assam made the maximum improvement by moving up 3 ranks (from 15 to 12)while on the other hand Andaman & Nicobar registered the maximum drop in rank (down from 4th to7th rank).

The Report also pointed out that nearly half the states and UTs did not reach the half way mark in the Composite Overall Index Score,and despite good performance, even the top ranking states and UTs could benefit from furtherimprovements. The maximum Index Score that a state/UT can achieve is 100. In the case of Larger States,the highest observed Overall Index Score of 82.20 is for Kerala, followed by 72.42 for Tamil Nadu, 69.96for Telangana and 69.95 for Andhra Pradesh which is quite a distance from the frontier (100 points).

Incase of Smaller States, the Front-runner states were Mizoram with Index Score of 75.77 and Tripura withIndex Score of 70.16. Among the UTs, the Front-runners were DH & DD and Chandigarh with Index Scoresof 66.19 and 62.53 respectively. This clearly indicates that there is room for improvement (to reach to thepotential score of 100) for all states/UTs, including the best performing states/UTs. There is an urgent needto accelerate efforts to narrow the performance gap between the states/UTs as 50 percent of the LargerStates, 50 percent of Smaller States and 43 percent of the UTs did not even reach the halfway mark interms of the Composite Overall Index Score.