In future, recommendations for boosters will definitely come

ICMR-National Institute of Virology (NIV) in Pune has been working on a war-footing for the whole of last one year.  “2021 was a difficult but rewarding year for us”, said Ms. Priya Abraham, Director of ICMR-NIV, which has been at the forefront of scientific research on SARS-CoV-2 in the country. In an interview with India Science, the OTT channel of the Department of Science & Technology, she says in future, recommendations for boosters will definitely come. 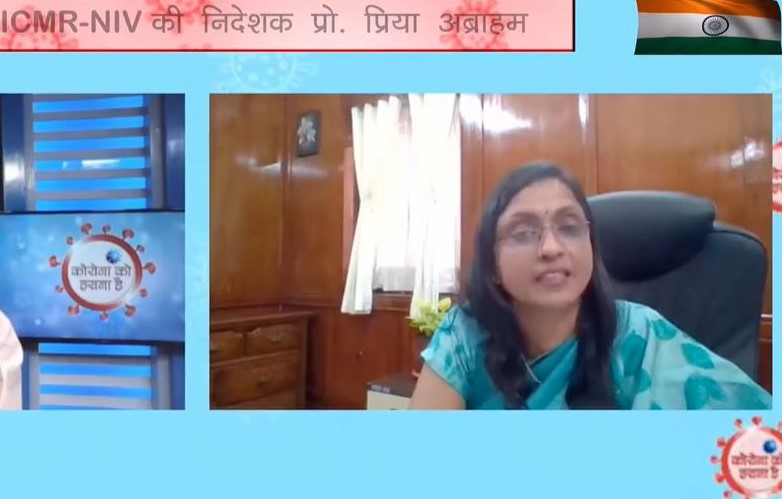 “Studies on booster dose have been going on overseas and at least seven different vaccines have been tried out for booster dose. Now, WHO has put a stop to it till more countries catch up with vaccination. This is because there is an alarming vaccine gap between high-income and low-income countries. But, in future, recommendations for boosters will definitely come,” she emphasized.

Giving a quick overview of vaccine development process carried out at the institute which has been at the forefront of scientific research on SARS-CoV-2 in the country, she explained: “We quickly isolated and gave a strain to Bharat Biotech International Limited (BBIL) by the end of April (2020), after which they developed a whole virion-inactivated vaccine in the month of May and gave us back for review.  We checked it for its complete inactivation, did its complete characterisation and started pre-clinical trials on hamsters and non-human primates, that is, monkeys. Those are very difficult experiments to do. These were conducted in our highest Bio-Safety Level-4 level containment facilities.  In the next phase, we assisted them in the Phase I, II and III clinical trials in areas such as diagnostic aspect and laboratory support”.

On Covaxin for Children, she said, “ Presently, Phase II and III trials of COVAXIN are going on for children in the age group of 2-18 years. Hopefully, the results are going to be available very soon. The results will be presented to the regulators. So, by September or just after it, we may have COVID-19 vaccines for children. This apart, ZydusCadila’s vaccine trial is also going on. This can also be applied for children and will be made available.”

“ZydusCadila’s vaccine will be the first DNA vaccine which will be available for use. Besides, there is Gennova Biopharmaceuticals Ltd.’s m-RNA vaccine, Biological-E vaccine, Serum Institute of India’s Novovax and, another interesting one – an intra-nasal vaccine developed by Bharat Biotech International Limited. This vaccine does not require a jab and can be delivered through nostrils,” she added.

On efficacy of vaccines on Delta Plus variant, Priya Abraham clarified that first of all, the Delta-plus variant is less likely to spread than the Delta variant itself. Mainly Delta variant is present in over 130 countries. It has spread all over the world and it is this variant which is highly transmissible. In NIV we have done studies on this variant. We have studied the antibodies produced in the bodies of vaccinated people and checked it against this variant. It has been found that efficacy of antibodies against this variant has been reduced two to three folds.  Yet, the vaccines are still protective against the variants. They may show a little less efficacy, but vaccines are very important to prevent serious forms of disease due to which patients may get hospitalized and even die. So, whatever the variant, vaccine is till now protective against all, including the Delta variant. So, there should not be any hesitancy at all.

She also clarified that the patients who received different vaccines in two doses were safe. No adverse effect was noted and immunogenicity was a little better. So, it is definitely not something which will cause a safety issue.