Monsoons season is usually a high-risk period for seasonal snake bites. Every year close to 81,000 and 138,000 people die from snake bites globally and of these, nearly half are in India, according to  WHO. In one such incident, recently, a 5-year-old boy, Nischit, who had slipped into a coma and complete paralysis due to a deadly snake bite and was fighting between life and death, was given a new lease of life through the efforts of doctors at Aster CMI hospital and with the funds raised by a crowd-funding platform. 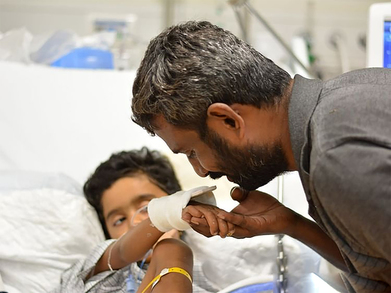 Nischit, who hails from a rural village in Adichunchanagiri a place near Hassan in Karnataka was bitten by a common Krait snake on his toe when he had accidentally stepped on it while opening the door of his house late evening. Having identified the snake and knowing its potent venom, his family rushed him to the nearby hospital. The child already had significant exposure to the poison and was slipping into a coma. The local doctors then informed the family that they may not be able to ensure the child’s survival. Devastated by this news, the family decided to shift the child to Aster CMI Hospital with respiratory support through a 2 hour Ambulance journey. On presentation to the Pediatric Emergency room at Aster, the child was completely paralysed with no respiratory efforts and unstable blood pressure. He was admitted to the Children’s ICU on life support.

Nischit was administered anti-snake venom and medicines to reverse the paralysis. Krait is one of the most deadly Neuroparalytic snakes whose venom damages the nerve endings and the neuromuscular junction resulting in prolonged paralysis and locked in syndrome. He was on long term Ventilatory support and underwent Tracheostomy - an artificial tube surgically pinned to his windpipe in order to allow proper breathing. The child slowly regained consciousness after 7 days and started showing flicker of movement in the distal muscle groups of hands and feet.  He eventually broke out of his paralysis but the recovery of breathing muscles took another 2 weeks.

He required 3 weeks of further treatment to recover completely but Nischit’s father Manjunath who is a daily wage labourer and earns no more than Rs. 6,000-7,000 per month through his farming and the revenue generated by his small tuck-shop in his village needed a helping hand to provide treatment for his son.  Despite the poor economic condition of the family, they somehow managed to pay Rs. 2 lakhs for the treatment of the child. The family still had a pending balance of 4 lakhs to pay, apart from the new expenses that were to follow. This is when Aster CMI hospital in collaboration with a crowd-funding platform came forward to raise the additional funds for Nistchit’s treatment and played a vital role in saving his life.  After staying for close to 20 days in PICU and with further medication, the child started responding to the treatment and by the third week was taken off from the ventilator and was able to stand and walk.

Dr. Chetan Ginigeri, Consultant, Paediatrics and Paediatrics Intensive Care Unit, Aster CMI Hospital, said, “As he is a young child, the venom transfer and fast heartbeat causes rapid spread of venom. By the time the child presented to us – he was very sick, and was in coma with complete paralysis. He required complete respiratory and other organ support along with nutritional rehabilitation to allow a very slow yet complete recovery.”

Thanking the doctors for saving the life of their son, Manjunath, Nischit’s father said, “He is our only child.  He is full of energy and aims to become a doctor one day. I am thankful to Aster CMI doctors who helped us mobilize the funds through crowdfunding and gave a new lease of life to my son. Without their help and support, our child would not have lived to see another day.”