Vice President M Venkaiah Naidu has expressed expressed his anguish over instances of stigmatizing COVID-19 patients and denial of dignified farewell to people, who succumbed to the virus. He said such incidents were totally uncalled for and urged the local communities and the society at large to prevent the recurrence of such happenings.

In a Facebook post Naidu said “The need of the hour is to fight prejudice and nip it in the bud. Otherwise, it can become more toxic than fake news and misinformation”. Urging everybody to treat COVID-19 patients with understanding and empathy, he said “It should be remembered that nobody is totally safe and the invisible virus can infect anybody”. 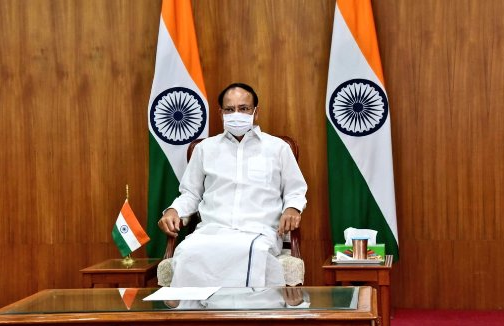 Pointing out that since time immemorial India is known as a land of tolerance and people have been displaying their empathic nature by coming to the assistance of those in distress, the Vice President described as “disturbing” the media reports of some people, including relatives, of stigmatizing and ostracizing those infected with Corona virus, mainly due to fear of contracting the infection. Referring to instances, where people opposed providing burial space to those who died of COVID-19, he said it was totally unacceptable and goes against the age-old Indian traditions of being solidarity with bereaved family members.

Observing that a host of factors such as illiteracy, superstitions, fake news and rumours fuel false beliefs among the people, Naidu urged the health authorities and the media to take up special campaigns to promote awareness and educate people on all the facts relating to the Corona virus and its transmission. “The correct message has to be reiterated, reinforced and widely disseminated to ensure that it creates a positive impact and brings about the desired transformation in behaviour. Expressing optimism that the dire situation caused by the pandemic can be overcome by striving collectively, he said the first and foremost task is to flatten the curve.

“Every citizen has to act responsibly by adhering to the norms like frequent hand washing, wearing masks and maintaining social distancing”, he emphasized. He also urged everybody to pay attention towards boosting one’s immunity and practicing Yoga for overall improvement of health.

Observing that many people get into negative emotions like anger and restlessness during times of crisis, Naidu stressed the need to cultivate positive emotions like contentment, gratitude, empathy, forgiveness and a whole gamut of positive traits.

“In fact, this is the essence of spirituality”. Referring to Kargil Vijay Diwas today, the Vice President said “As we pay homage to martyred soldiers on Kargil Vijay Diwas, the nation is ever grateful to Indian Armed Forces for their valor, patriotism and sacrifices in protecting the sovereignty of the motherland”. He also called for expressing gratitude to farmers, the “unsung COVID warriors”, who have been rendering selfless service in ensuring food security and to support the dedicated efforts of healthcare personnel, police, media, sanitation workers and delivery persons.