A record 6, 61,892 samples were tested for COVID-19 in the last 24 hours. This takes the cumulative testing to 2, 08, 64,750 samples and the Tests per Million (TPM) to 15,119. The combined and focused efforts of Union and State/UT Governments have resulted in ramped up testing across the country aimed at early detection and isolation of COVID-19 positive cases. The evolving ICMR’s testing strategy has widened the testing net in India. WHO in its Guidance Note on “Public Health Criteria to Adjust Public Health and Social Measures in the Context of COVID-19” has advised comprehensive surveillance for suspected cases. WHO advises that a country needs 140 tests per day per million populations. 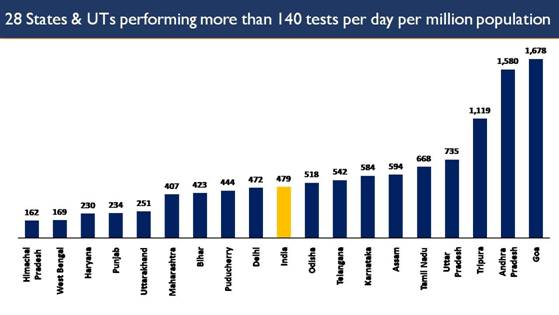 While India conducts 479 tests/day/million on an average, there are 28 States/UTs in India which are conducting more than 140 tests/day/million, prescribed by WHO. The focused strategy based on the “Test, Track and Treat” approach focuses on reducing the Positivity Rate of COVID-19 tests. India’s average positivity rate stands at 8.89%, as on date. There are 28 States/UTs which have positivity less than 10% which indicates that the testing strategy is on the right track. The effort of Centre and State/UT governments is to further improve the Positivity Rate to 5%. With the aim to conduct 10 lakh tests daily, the testing capacity is being continuously ramped up. The testing lab network in the country currently stands at a total of 1356 labs in the country; 917 labs in the government sector and 439 private labs. These include: