Second Round of Dry Run for COVID-19 conducted across India

Vaccine administration to 1.3 billion people in India is a mammoth task and hence, all stakeholders of the health sector would have a key role to play in its implementation. While the second dry for COVID-19 vaccine was conducted today at multiple centres across India, Union Health Ministry assured the nation that the vaccines will be given to the citizens very soon. 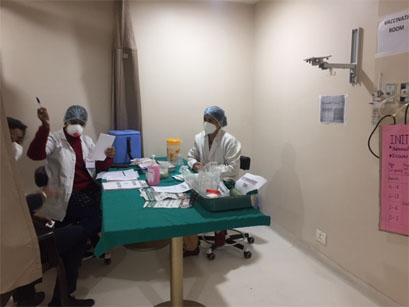 Currently, India has over one crore cases of infection and the Centre plans to conduct the world’s largest vaccine drive soon. The nationwide dry run aims to understand the best ways of vaccine administration and plug loopholes in logistics and training. As per the government’s plan, in the first phase, nearly 30 crore population would be inoculated by August this year and that constitutes 22 % of the population including 70 lakh healthcare professionals and 2.1 crore frontline workers. During the first phase, nearly 26 crore people above 50 years and 1.2 core other people with co-morbidities will be vaccinated. The government has chalked a roadmap to achieve universal vaccination for COVID-19 in a two-year time.

For such a mammoth task India may need 1.3 lakh-1.4 lakh vaccination centers, 1.0 lakh healthcare professionals (as inoculators), and 2.0 lakh support staff/ volunteers for mass-inoculation of prioritized individuals. The first round of dry run was started last week once the drug regulators gave approvals for restricted emergency use of two vaccines developed by the Serum Institute (COVISHIED) and Bharat Biotech (COVAXIN). With the second dry run today, India is now all set to roll out at least two vaccines in the coming days.

“We have ensured that every detail is conveyed to the people from the national level to the grassroots and thousands of health workers have been trained for vaccine administration,” Dr. Harsh Vardhan said, emphasizing that partnership with the NGOs would help in effective distribution and administration of the vaccine.

Delhi Health Minister Satyendar Jain reiterated that people of the National Capital will get the vaccine free and the state government has made all preparations for the vaccine administration.

In Delhi, several hospitals including the All India Institute of Medical Sciences (AIIMS), the Safdarjung Hospital, the Pandit Madan Mohan Malviya Hospital, Apolo Hospital, HCMCT Manipal Hospitals, the Pushpwati Singhania Hospital, and Research Institute among others conducted the dry run.

According to officials, in the city, nearly 1,000 vaccination centres will be set up for universal vaccination and in the first phase 600 centres, with multiple booths would be operational. One booth would inoculate nearly 100 people.

For an effective rollout of the vaccine campaign, a new App will be launched. Co Win App aims to scale up the mechanism for the COVID-19 vaccine distribution system across the nation.

Electronic Vaccine Intelligence Network (eVIN) is expected to play a critical role in vaccine administration and campaign in the country. The network has been developed indigenously. The technology enables digitization of vaccine stocks and it also strengthens the supply-chain by monitoring the temperature of the cold chain through a smartphone application.