First batch of Covishield vaccine arrives in Delhi from Pune

A SpiceJet flight flew from Pune with the first consignment of Covid-19 vaccines and arrived at the Delhi airport. Later in the day, an Air India flight is also expected to fly in another lot of the vaccines to Delhi. This is a milestone achieved in India's fight against coronavirus, four days ahead of the launch of  nationwide inoculation drive. 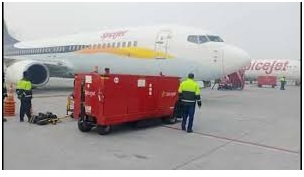 The SpiceJet flight SG8937 brought the very first consignment of vaccines (34 boxes and weighing 1088kg) to Delhi. At the Delhi airport, a team of the officials from the Airport Authority of India, ministry of civil aviation, health ministry, Delhi airport and Central Industrial Security Force officers received the vaccines. After that the vaccines were taken to the cargo terminal where they were stored in temperature-controlled units and soon will be transported to designated hospitals amidst heavy security in GPS-enabled trucks.

The Delhi Police will escort the vaccine-loaded trucks to the designated hospitals in the city and have made elaborate arrangements outside the airport to facilitate speedy and smooth movement of the vaccines.

According to the officials from the ministry of civil aviation, Air India, SpiceJet, GoAir and Indigo will operate nine flights from Pune with 5,650,000 doses to Delhi, Chennai, Kolkata, Guwahati, Shillong, Ahmedabad, Hyderabad, Vijayawada, Bhubaneswar, Patna, Bengaluru, Lucknow and Chandigarh.

Videh Kumar Jaipuriar, CEO, Delhi International Airport Limited, said that a temperature-controlled facility, with temperatures ranging from -20 degrees Celsius to 25 degrees Celsius, at two cargo terminals can efficiently and safely handle these temperature-sensitive vaccines. “We have cool chambers and cool dollies to maintain the temperature required for these vaccines at the cargo terminal and during transit between aircraft and terminal or vice versa. Both the terminals can handle around 5.7 million vials a day,” he said.