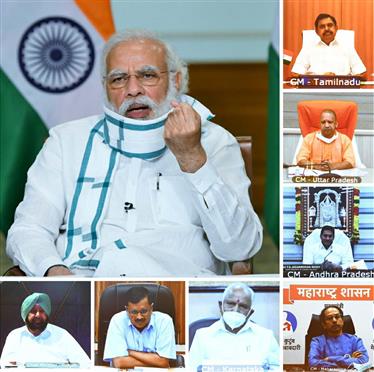 The Prime Minister emphasised that there is a need to further strengthen health infrastructure to tackle COVID, improve the network of tracking and tracing, and ensure better training. He interacted with Chief Ministers of Andhra Pradesh, Maharashtra, Karnataka, Delhi, Punjab, Tamil Nadu and Uttar Pradesh via video conferencing to review status and response to COVID-19.

Stressing on the importance of saving each and every life, Prime Minister said that special focus is needed in 20 districts of Maharashtra with a greater number of cases. He suggested increasing RT-PCR testing in the State to five times of the current level.

Prime Minister said that Karnataka had developed a scientific mechanism of tracing and tracking, which has proved to be of immense benefit to the State.  He noted that 9 districts of the State have a high fatality rate, which needs urgent attention. He suggested increasing RT-PCR testing to three times of the current level, effective surveillance and contract tracing, along with focussing on behaviour change with regards to mask and sanitation.

Talking about the situation in Delhi, Prime Minister said that with the combined effort of the people, the State government and the Central government, the situation was brought under control. He stressed on increasing RT-PCR tests and also conducting these tests for all symptomatic people who have tested negative through Antigen test. Prime Minister noted that while Punjab had initially managed to control the infection, but now most deaths due to COVID are happening in the State, a big reason for which is the delay in patients reaching hospitals. He said that the State needs to come up with an awareness campaign to tackle the challenge. He expressed faith that the State will be able to bring down test positivity rate and case fatality rate.

Prime Minister said that the State of Tamil Nadu has come up as an example worth emulating, with its strategy of large scale testing and tracing, which has resulted in stabilization and reductions of daily cases. He noted that greater focus on reducing case fatality rate is needed in 7 districts of the State. He said that for telemedicine, the State has made good use of the e-Sanjeevani application, and added that the experience of Tamil Nadu will definitely prove beneficial for other States as well.

Noting that Uttar Pradesh is the most populous State and witnessed the return of a huge number of labourers, Prime Minister said that the State still managed to effectively control the situation through widening the testing net. He expressed faith that the State will further strengthen contact tracing on a war footing. He noted that there are 16 districts in the State where more than 100 cases are being reported daily, adding that mapping of infected regions and greater focus is necessary, along with continuously making people aware of using masks and maintaining do gaz doori.

Prime Minister exhorted the States to assess the efficacy of local lockdowns of 1-2 days in controlling the spread of the virus, asking if the decision is preventing kickstart of economic activities in the States. He said that the country needs to not only keep fighting the virus, but also move ahead boldly on the economic front.