India continues to report high number of recoveries while a total of 70,589 new cases have been reported in the last 24 hours in the country. Union Health Ministry data shows 10 States/UTs account for 73% of the new confirmed cases. 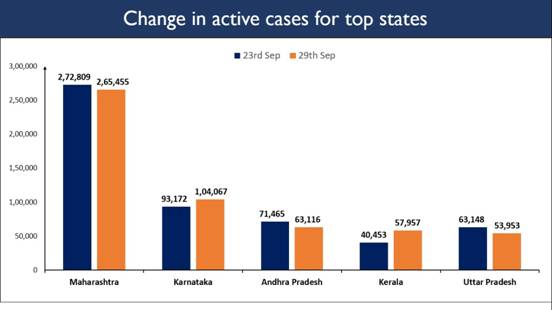 The recovered cases have exceeded the new confirmed again during the past 24 hours.  With this, India’s Recovery Rate has leaped past 83% today. According to the Health Ministry data 84,877 recoveries have been registered in the last 24 hours in the country while the number of new confirmed cases stands at 70,589. The total number of recoveries has touched 51,01,397.

On new cases also Maharashtra continues to lead the tally. It has contributed more than 11,000 followed by Karnataka with more than 6,000 cases.There have been 776 deaths in the past 24 hours. 10 States/UTs account for 78% of the deaths in the last 24 hours due to COVID. Of the new deaths, Maharashtra reported more than 23% of deaths with 180 deaths followed by Tamil Nadu with 70 deaths.