Since March 2020, there has been a considerable increase in the infrastructure of  COVID-19 testing . This has resulted in exponential increase in country's testing numbers. Now 15 lakh tests can be done everyday ramping up testing capacities. In a tweet the Union Health Ministry said that high levels of testing and surveillance have led to the identification of the infection at an early stage enabling people with symptoms to quickly isolate themselves thus reducing the spread of the virus. 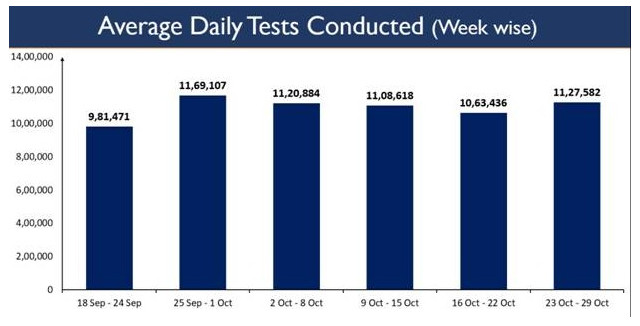 Aggressive testing and strict 'test-track-treat' strategy  has resulted in sharp decline in national cumulative positivity rate and  the rate of spread of infection has been effectively contained.  Health authorities have been advised not to compromise on testing and keep the level of daily tests at a higher level with greater proportion of RT-PCR tests. In order to ensure proper Standard of Care, early identification of the infection and early hospitalization, regular monitoring and testing of symptom development and hospitalization trend amongst the home isolated patients is also important.

Also focus on rapid contact tracing, effective isolation of the traced contacts within the first 72 hours and widespread testing has brought down the positivity rate and today it touched 7.54% today. Moreover, special attention  on containment zones , implementation of strict perimeter control and proactively using masks and sanitizers have led to the declining trend of cumulative positivity rate in the past three weeks .

In the last nine days nearly one crore tests were conducted and the daily positivity rate now stands at 4.64%. In India active cases stand at 6,03,687 today and a declining trend of the active cases can be seen. There are more than 73 lakh (73,15,989) recoveries and about 56,480 have recovered and discharged in the last 24 hours while the new confirmed cases stand at 49,881.

79% of the new recovered cases are observed to be concentrated in 10 States/UTs and Maharashtra  has the maximum recovery rate with more than 8,000 single day recoveries followed by Kerala with more than 7,000 recoveries.

However, 49,881 new confirmed cases were recorded in the last 24 hours. 79% of the new confirmed cases are from 10 States and UTs. Kerala has very high number of new cases with more than 8,000 cases followed by Maharashtra with more than 6,000 cases. Sadly 517  fatalities have been reported in the past 24 hours with Maharashtra reporting the  maximum fatalities with 91 cases.