The Indian Institute of Technology (IIT)-Kharagpur has come up with a portable and affordable COVID-19 testing device which can deliver test results within an hour, reducing the anticipation that people have for two to three days awaiting test results. 'COVIRAP' is cuboid-shaped and uses unique temperature –controlled system to test Covid 19. It has also received certification from the Indian Council of Medical Research (ICMR). 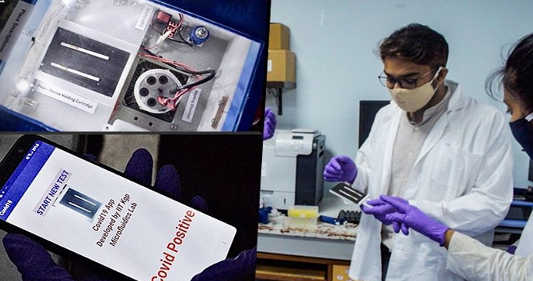 Covirap has a microfluidic paper-based detection system where the DNA of the virus is mixed with chemicals on a paper strip and the colour of the microfluidic paper determines whether a sample is positive or negative.  The device works on a pre-programmed test fed into it. The team has also developed a mobile app to read the test result on the strip.  It has been devised keeping in mind the mutating nature of the SARS-CoV-2 virus.
The cost of developing the device is less than Rs.10,000 and testing cost is around Rs 500 making is easily affordable for the common masses. The price has chances of further reduction with government intervention. Talking of affordability, the machine can test between 3 and 10 samples at a go, thus the kit can be used in rural areas for pool testing making it an effective and accurate tool for quick screening.
The device is very user friendly and the kit comes with a set of instructions in Bengali and Hindi, and can be operated by lab technicians with basic pathology skills. Even rural youth with minimal training can operate this device. The device is highly robust, provides test results within an hour and is capable of detecting extremely low levels of viral loads. This helps detect the infection at an early stage and isolate from others if tested positive. Not only is the device portable but also requires low energy supply.
Prof V.K. Tiwari, director, IIT Kharagpur, said, "We had applied for a patent in July itself and since it is under process, we can claim rights on this intellectual property. We are in the process of finalizing talks with several private and government companies regarding its mass production and will very soon start production."
The machine has been made very generic and it can be used to test other infections as dengue, influenza, TB, Japanese encephalitis and malaria which seems promising enough to curb the spread of covid co-infection as well.