The Union Minister for Health and Family Welfare said while addressing the Boston Center of Excellence for Health and Human Development through Video Conference, “Our treatment protocol for COVID patients is well defined now”. 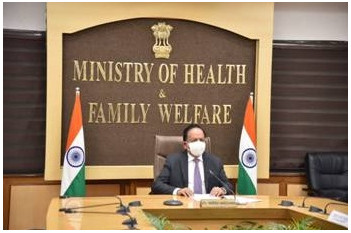 He not only congratulated the Boston Center of Excellence (BoCE) for Health and Human Development for bringing together experts to research a better cure and better healthcare for all but also compared the ongoing Pandemic to a transitory state of our civilization. He said, “We have not seen the Spanish Flu, World War I, and World war II. But we are living in a phase of a silent war. Over 100 million people perished. And in many cases, they could not be visited by their dear ones during the last moments of life. Their last-rites and funerals were also had to be done very humbly.  And those millions who survived also have many complications, besides the financial burden put on them.”

Dr. Harsh Vardhan said, “It is not the first one and definitely not the last one. But this COVID 19 will soon be a past episode of the 21st century. Our treatment protocol for COVID patients is well defined now. Fewer and fewer people infected are dying. We will have vaccines available very soon, and the cases will significantly go down in the next few months.”

As India has already mastered all components of Modern medicine from antibiotics to emergency care, surgery, immunization, and vaccine, Dr Harsh Vardhan said that the focus is now on the cost, quality, and affordability of this system which is more complex. He highlighted that India has already taken the primary steps in remote diagnostics and treatment using latest telemedicine technology to treat people in 7,00,000 remote villages in the country.

While this year has been full of miseries due to COVID 19, Dr. Harsh Vardhan pointed out some of the positive things that people should look at and turn this crisis into an opportunity:

• The closure of factories has led to reduction in vehicular traffic. People have started appreciating reduction in pollution and are becoming concerned for mother nature. A significant push for behavioral change to achieve similar outcomes in future has been seen.

•  Internet has connected friends, families and colleagues from all parts of the world. The global community has successfully created virtual offices and classrooms, pushing the boundaries of telecommunication capabilities.

• It is said that ‘Necessity is the mother of invention’. The process of vaccine creation which earlier used to take ten years now has reduced to almost 10 months. This rapidness of vaccine creation will have a cascading effect on new technologies that will help us all in the near future in faster drug discoveries, lowering the cost and making it more affordable for poorer sections of our population.

Dr. Vardhan referred to Yoga and Ayurveda as India’s gift to the world. He said, “The ancient knowledge and health-management system have been using nature’s cure for millennia. The time has come for modern medicine and India’s traditional system to go together with an integrative approach to impact our lives and much better disease outcomes.”

Concluding his speech he invited knowledge and technology experts and inventors to India to join hands with the country’s scientists and create a collaborative platform to heal people all round the globe.