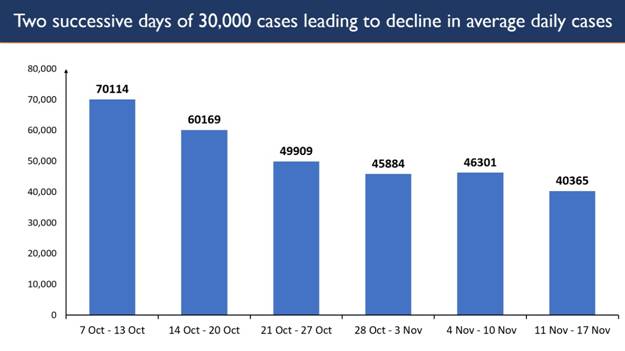 While this signifies the wide adoption of COVID appropriate behaviour among the population, it also assumes significance in view of the high number of daily cases being continuously reported in many countries in Europe and the Americas. The trend of new daily recoveries exceeding the daily new cases continues with 40,791 cases recovering in the last 24 hours against just 29,163 newly detected cases.

The Government continues to maintain a high level of countrywide testing. Total tests stand at 12,65,42,907 today. This has led to bringing down the cumulative positivity to 7.01%. The Active Caseload which has now stands at 4,53,401 comprises just 5.11% of all cumulative cases. The total recovered cases stand at 82,90,370. With this, the Recovery Rate has improved to 93.42% today.

According to the Ministry, 72.87% of the recovered cases reported in the last 24 hours are from ten States/UTs. Kerala saw the greatest number of recoveries as 6,567 confirmed cases tested negative. West Bengal registered 4,376 daily recoveries while Delhi reported another 3,560 of them. As per data 75.14%of the new cases have been reported from ten states/UTs.

Meanwhile, on vaccine front vaccine maker Bharat Biotech has announced that it has commenced Phase-3 trials of Covaxin, India's first indigenous vaccine for Covid-19. The Phase-3 trials, which involve 26,000 volunteers across India, are being conducted in partnership with the Indian Council of Medical Research (ICMR). This is India's first Phase-3 efficacy study for a Covid-19 vaccine, and the largest Phase-3 efficacy trial ever conducted in India, the Hyderabad-based company said.