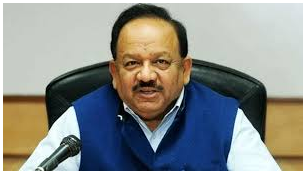 India has seen a progressive decline in active cases in the past few months and Dr. Harsh Vardhan seemed to be quite pleased with India’s progress in combating the virus. “ We will soon be completing a journey of 10 months in fighting Corona. The country is now witnessing substantial improvements in COVID parameters. The number of cases and deaths are in a declining phase. The active cases have been substantially reduced. The Recovery Rate of India has surpassed 92% today. The Case Fatality Rate is also declining and stands at 1.49%. With over 2000 labs, the testing capacity has also increased”, he said.

With the onset of winter season and the festive season ahead he urged the citizens to follow COVID appropriate behavior and be aligned to Hon. Prime Minister’s message of not taking the virus lightly until the vaccines were out. Dr. Harsh Vardhan said, “In the coming festival and winter season, the virus poses potential threats. It becomes very important to follow COVID Appropriate Behaviour to cut the transmission of virus. Whenever there is a laxity in following basic precautionary measures, the country has suffered.”

Dr. Harsh Vardhan said, “Karnataka has the second highest cumulative cases after Maharashtra. Karnataka has a Recovery Rate of 93% which is more than the national recovery rate. The case fatality rate (1.35%) is also lower than the national average.” He appreciated the efforts Karnataka in reducing active cases and was quite impressed with the State’s high impetus on IEC activities.

However, he was concerned about the high case load districts of Karnataka like Urban Bengaluru, Mysuru, Bellari, Dakshin Kannada, Hassan and Belagavi. After speaking to the officials of the districts where the positive cases are multiplying and the recovery rate is eventually declining, Union Health Minister urged the State to adopt COVID Appropriate Behaviour by adopting widescale and high visibility IEC campaigns .

The health authorities, Dy. Commissioners and DMs of the six districts with increasing active cases and mortality interacted with the Union Health Minister and informed him about the measures taken to contain COVID. Currently Karnataka is adhering to 4 T’s of Tracing, Testing, Treatment and Technology to tackle COVID-19. Not only has testing increased from 10,000 tests per day in June to over 80,000 per day as of now but also testing facilities have been made available in all the medical colleges in the state which has increased testing capacities manifold. According to the  State authorities 80% of the tests done are by RTPCR and more than 8 million tests have been done in Karnataka so far. Random pool testing and Targeted testing has been done to detect early signs of the infection and provide appropriate treatment.

Sh. Rajesh Bhushan, Union Health Secretary brought to notice that the number of  new positive cases and mortality rate in Karnataka have reduced drastically.  He also mentioned that The State should engage continuously with all the stakeholders in all the districts with high fatality rate and aim towards bringing the positivity level to less than 5%.

In a brief presentation on the current status of the pandemic in Karnataka, Dr S K Singh, Director NCDC focused on the need for uninterrupted vigilance and observe Covid Appropriate Behaviour.