Globally, the standard treatment modality has been struggling for almost a year to find the vaccine to curb the lengthening curve of the unprecedented COVID-19 pandemic with no final outcome yet. In the absence of deterring the COVID-19 scourge therapeutically, it has been acclaimed globally that strengthening the immune system will work wonders in combating the pandemic – an all-time well tested mantra to stay safe and healthy. Having recognised the significance of the holistic approach of Ayurveda, the Union Health Minister Harsh Vardhan has backed the role of Ayurvedic remedies in the prevention and treatment of the coronavirus disease (COVID-19) and hailed their immunity-boosting properties. 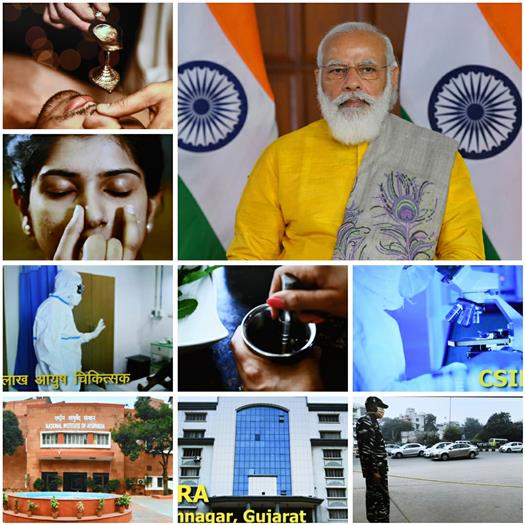 Ayurveda is the science of longevity and self-actualisation. It teaches individuals to live sustainably in harmony with nature, preserving and enhancing the wellness of the healthy. As a contemporary health science, Ayurveda deserves universal global recognition through the proclamation of World Ayurveda Day. On November 13, India also observed Ayurveda Day  which was observed  at over 150 locations in over 75 countries across the globe. Over 60 international organisations participated to make the day memorable.

In India, on November 13, Prime Minister Narendra Modi  dedicated to the nation an Ayurveda teaching and research institute here in Gujarat that will offer a range of courses and forge interdisciplinary collaborations to give a contemporary thrust to the ancient medicine system. The newly formed Institute of Teaching and Research in Ayurveda (ITRA), which the PM inaugurated through video conferencing, has been accorded the status of an “institution of national importance” (INI). ITRA, situated in the Gujarat Ayurveda University campus in Jamnagar city, was created through an Act of Parliament recently. ITRA is the first institute to enjoy this status in the AYUSH (Ayurveda, Yoga & Naturopathy, Unani, Siddha and Homoeopathy) sector, said a release by the PIB.

Modi said Ayurveda is India’s heritage whose expansion entails the welfare of humanity and all Indians will be happy to see that the country’s traditional knowledge is making other countries prosperous.

“It is a matter of pride for all Indians that the WHO has chosen India for establishing its Global Centre for Traditional Medicine. Now work will be done in this direction from India,” he added.

On the relevance and the significance of Ayurveda,  Anand Shrivastava, Chairman, Maharishi Ayurveda, said, " The initiatives and events being organised will establish Ayurveda as contemporary health science. India's natural system of healing — Ayurveda — has spread worldwide as an innovative and comprehensive system of mind-body medicine. This modern global Ayurveda is rooted in traditional Ayurveda with its embracing of Vedic knowledge on all levels from diet and herbs to meditation. It turns out a differentiator as it seeks to extend the boundaries of medicine beyond chemical drugs and physical concerns to a higher awareness within us connected to the universe as a whole. It is squarely proven that Ayurveda is ecologically harmonious and works with nature's abundance, attuning us to the transformative movement of life."

"In three and a half decades, we have diversified our product categories, and now we export our products to international markets in over 50 countries across the globe including the US and Europe. We fall into the wellness zone as we back our products and services with robust research evidence as well as internationally accepted certified manufacturing processes. This gives additional value, making us — a differentiator of sorts. We draw inspiration from our Ayurvedic texts but present our products in the most modern formats" he added.

India is more a civilisational state than a nation-state wherein Ayurveda has its age-old civilizational legacy intact. However, in the 21st century, time is ripe for India to concretise and take measured steps to hypothesise Ayurveda as a health science and knowledge system, not just for herself but for the world at large.

International celebs and experts are in unison about the uniqueness of Ayurvedic therapy and its impact from a global perspective. Katy Perry, the famous global pop star, referred to her investigation into traditional Indian medicine for some of her treatments. In an interview with an Australian radio show, she said, "There are ancient ways to heal yourself besides just taking a pill, which is something I love to always investigate. So I did this thing called panchakarma — it stems from India and its Ayurvedic eating and cleansing."

"Although, Ayurveda seems to go global, yet, it has several challenges ahead. The current global Ayurveda/Herbal market stands at around $3 billion, with a healthy CAGR of 16 per cent. This growth is expected to continue for the next decade. However, the biggest challenge is of the supply chain because as an Ayurveda business, the company is dependent on multiple herbs being harvested from different parts of the country. The company is based on systems, and finds it challenging to have the same systems being implemented down the line to the very beginning of the supply chain — that is the farmer.  Over the years, the company has trained many farmers to turn to organic farming. The other big challenge is 'international regulatory'. Ayurveda comes under the 'food supplement segment' in the western world. This restricts the growth in the international markets," said, Dr Saurabh Sharma.

It is promising to note that several states in India are also emerging as Ayurveda hotspots; a recent addition being Himachal Pradesh, where a large number of professionals from various fields in the US are visiting which is also enabling the state's local tourism substantively. But what will be the future of Ayurveda in the next decade is a question every stakeholder such as — policymakers, leaders, practitioners, doctors and therapists must ask themselves?