The Fight against TB needs to be made into a People’s Movement: Dr Harsh Vardhan

Chairing a meeting with the various developmental partners working in the field of Tuberculosis (TB) care and management in India to discuss the challenges and opportunities in eradicating TB by 2025 Union Health Minister Dr Harsh Vardhan said that the fight against TB needs to be made into a people’s movement. He called for a joint collaborative platform where all the partners could join hands together in eliminating Tuberculosis by 2025 from India. 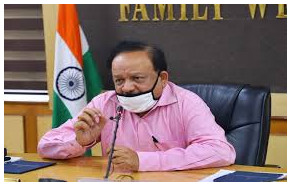 He said that an effective communication strategy, which would focus on reaching the maximum population; complement with preventive, diagnostic and curative aspects of TB management; work towards demand generation; ensuring regular high visibility mass-media coverage; and also focus on community ownership and mobilization is required. “The fight against TB needs to be made into a Jan Andolan, a people’s movement”.

Dr.Vardhan stated that the biggest barrier that keeps people from coming forward and reporting the diseases and availing of the treatment is the stigma attached to the disease which should be addressed immediately. He also urged the Developmental Partners to undertake community led monitoring to get real time information about the challenges on the ground level and feedback from the people as to what is effective and what not.

The Health Minister appreciated the developmental partners for the hard work put in by them in various public health efforts including that of Polio and Tuberculosis. Recalling the eradication experience, he stated, “Every challenge poses an opportunity. It wasn’t easy to eradicate polio in a populous country like India. But with the firm determination of all the stakeholders, India managed to eradicate the disease and the polio eradication program became a model for other countries to follow.”

Dr. Vardhan said, “The support of all the partners is critical in eradicating the Tuberculosis. The country is relentlessly fighting the pandemic from last 11 months. But even at a time when COVID is taking prioritized attention, we should not lose the sight of the goal to eliminate TB by 2025. We have continued to focus on Tuberculosis and every meeting for COVID has had TB as an agenda item”.

Focusing on the elimination of TB from the country by 2025, Dr Harsh Vardhan stated that “We are running against time. Advocacy and engagement are a way to move forward. The country has achieved significant success in the last two years under “TB Harega, Desh Jeetega” campaign that targets to achieve the Sustainable Development Goal target related to TB by 2025, five years ahead of the global target of 2030.”

The Union Health Minister stated that under National Tuberculosis Elimination Program, there is an 18% and 12% increase in case finding in 2018 and 2019 respectively. Private sector has also played an important role in TB notification with 77% increase in the private sector notification from 3.8 lakhs in 2017 to 6.8 lakh in 2019. Over 2018 and 2019, commitment has been received from 15 States and UT for Ending TB by 2025. COVID has caused a setback for which some measures are implemented to make up for it.

Rajesh Bhushan, Secretary, (Health) said that convergent action will lead to achievement of the goals. The aim is to leverage the capacity of UN agencies, international bodies, NGOs and all other partnership to work towards eradicating the disease. All partners should collaborate to strengthen the existing treatment facility, diagnostic and lab facility, patient support system and communication that needs to be built around the strategy.

Concluding the meeting, Dr Vardhan urged every stakeholder to actively participate in TB elimination program to make this dream a reality. He said, “We need to develop synergy among partners and to devise a mechanism where there is no duplication of efforts.”