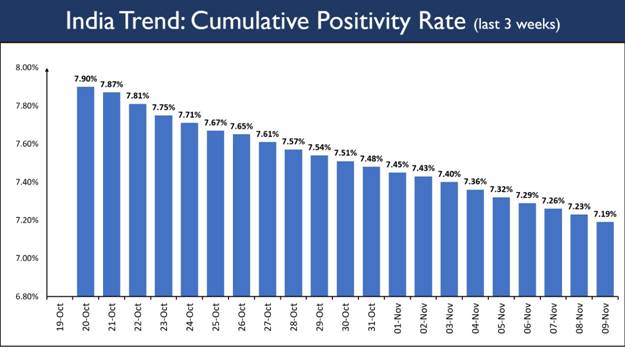 Meanwhile, National Capital -Delhi saw 7,745 new cases on Sunday — the highest number of daily cases reported so far by any city. This takes the total number of cases in the city to 4,38,529 while the death toll rose to 6,989 with 77 fatalities. The city performed 50,754 tests in the last 24 hours, recording a positivity rate of 15.26%. Over the last two weeks, the number of active Covid-19 cases has increased by more than 16,000 — the highest ever in the last six months — owing to the rising number of daily infections. Last week alone, Delhi reported over 6,000 daily cases, barring Monday (November 2) which saw 4,000 cases.

The twin factors of rising air pollution and a surge in Covid cases have increased the burden on Delhi’s hospitals with the number of vacant beds shrinking fast and out patient departments (OPDs) witnessing a spike in footfall, doctors said.

Across the country, new daily cases have been trending downward since 15th of October. Keeping with the trend of recoveries outnumbering new cases, nearly 49,000  patients have recovered in the last 24 hours. This trend has been observed for the 38th day today. This has played a pivotal role in pushing down the active caseload.

The active caseload in the country is 5,09,673 today. These cases contribute around 6 % of India’s total positive cases, indicating a sustained downward trend. The Recovery Rate of 92.49% is a reflection of the 79,17,373 recovered cases. 76% of the new recovered cases are observed to be concentrated in 10 States/UTs.

Amid growing backlash from the opposition BJP, Maharashtra Chief Minister Uddhav Thackeray on Sunday said that his government will soon reopen places of worship across the state after Diwali and is ready to face any criticism for the welfare of his state till then. The chief minister also urged citizens to avoid burning fire crackers and continue wearing masks during the festive period. In a public address via video-conferencing, Thackeray said: “We will open the temples and places of worship soon. Let Diwali be over. But even when we open the temples, you can leave your chappals [slippers] outside but not your mask.”