Kolkata-based SN Bose National Centre for Basic Sciences (SNBNCBS), an autonomous research Institute under the Department of Science and Technology (DST), Government of India has developed a “No-touch” & “Painless” device for non-invasive screening of bilirubin level in new-borns. The device called “AJO-Neo” is developed by Professor Samir K Pal and his group at the Centre.

The institute is also hosting one of the Technical Research Centres (TRC) funded by DST and in scientific collaboration with Nil-Ratan Sircar (NRS) Medical College and Hospital, Kolkata. The operation of the device is based on non-contact and non-invasive spectrometry-based techniques for measurement of neonatal bilirubin level as an alternative of total serum bilirubin (TSB) test without limitations of other available bilirubin meters. 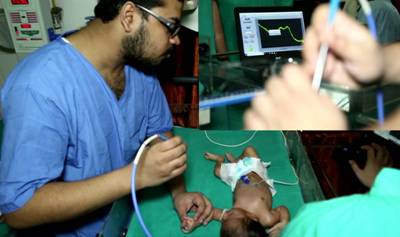 Careful screening of bilirubin level in new-borns is mandatory as per American Academy of Paediatrics (2004), to reduce incidents of a type of brain damage called kernicterus that can result from high levels of bilirubin in a baby's blood. Although invasive capillary collection of blood and the subsequent biochemical test is considered a gold standard for jaundice detection in neonates, transcutaneous bilirubin measurement using non-invasive instruments has obvious added advantages.

The Technology has been transferred by the National Research Development Corporation (NRDC), an enterprise of DSIR, Ministry of Science and Technology, Government of India in the presence of Prof. Ashutosh Sharma, Secretary, DST to a Vijayawada based company, M/s Zyna Medtech Private Limited.

“Development of convenient, non-invasive diagnostics based on deep understanding of physicochemical sciences is happening at a faster pace around the world, and the institutions focused on basic sciences such as SN Bose National Centre For Basic Sciences at Kolkata, are thus compelling partners in technology and device development,” said Prof Ashutosh Sharma, Secretary, DST.

Maninder Singh Lal, Chairman and Managing Director of the company, expressed satisfaction for getting opportunity to take part in the commercialization of Indian technology, which has the potential to rule the global market.

According to the study conducted by the SNBNCBS team in NRS medical college, the newly developed device (AJO-Neo) is reliable in measuring bilirubin levels in preterm, and term neonates irrespective of gestational or postnatal age, sex, risk factors, feeding behaviour or skin color. The device is found to deliver an almost instantaneous report (about 10 seconds) to a concerned doctor, who is sitting 10000 km away from the point of care. This is a significant achievement compared to the conventional “blood test” method, which may take more than 4 hours to generate the report. It has to be noted that detection of neonatal blood bilirubin (Hyperbilirubinemia) faster is extremely important for therapeutic management in order to avoid Kernicterus leading to Neuo-psychiatry problems in neonatal subjects. AJO-Neo also shows several advantages compared to other similar imported devices in the market.