Herd Immunity Not an Option in a Country like India

Apart from vaccine, another option to cope up with Covid-19 is herd immunity which refers to the situation when the spread of a disease is stopped naturally when enough of the population becomes resistant to the virus and not enough people are able to transmit it. On Thursday, Union Health Ministry category ruled out such option for a country like India.

Union Health Ministry Officer on Special Duty (OSD0, Rajesh Bhushan, who will be taking over the charge of Union Health Secretary on August 1, said, “Herd immunity is an indirect protection from a disease. This saves a population from a disease. But it develops when a vaccine is developed or when a population has already suffered and recovered from it. Herd immunity in India is not an option. It can only happen after a vaccine has been developed. 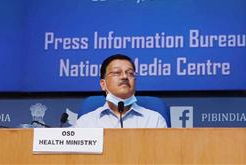 India cannot count on herd immunity to stop the coronavirus pandemic given its demography and scale, he said, adding that the country will have to rely on a vaccine to fully beat COVID-19. India crossed 15 lakh coronavirus cases this week and continues to have the fastest rate of growth in infections among the five worst-hit countries.

In a densely populated country like India, herd immunity cannot be a strategic option because this will come at a very high cost in terms of human lives lost and will cripple the health care system, according to the Ministry.

Herd immunity can only be achieved through immunisation and till then COVID-19 appropriate behaviour is the only way forward,” said Bhushan.

For months, the government has highlighted India's recovery rate but for a disease with a less than 4 per cent fatality rate worldwide, the recovery rate is not the best metric to measure the effect of the pandemic, experts have said.

Hopes for herd immunity were raised this week when a medical survey of nearly 7,000 people in Mumbai found that 57 per cent of the people who live in the city's cramped slums have had COVID-19 and most are asymptomatic or have recovered.

According to the Health Ministry, India's fatality rate has come down from 3.3 per cent on June 18 to 2.21 per cent on Thursday. On an average, 4.68 lakh tests have been conducted in the last four days, it said.

The Ministry also said that 21 states have less than a 10 per cent positivity rate. Rajasthan, Punjab, Madhya Pradesh and Jammu and Kashmir have a positivity rate of less than 5 per cent, it added.

The Health Ministry said there are currently 24 vaccine candidates that are in clinical evaluation stage in the world. Two vaccines being developed in India are currently in Phase 1 and 2 of trials to test if they are safe for humans. "There are three vaccines that are in Phase 3 [the final stage to check their efficacy] clinical trials. One is in UK, one in US and one in China. This means if they pass, they will seek the nod of concerned authorities and manufacturing and distribution will begin," it added.

As many as 54,660 confirmed cases were registered across the country, marking yet another high in daily cases. The seven-day rolling average for cases also crossed the 50,000 mark. The total confirmed cases went up to 16,38,951 with a 64.58% recovery rate (10,58,464 people have recovered while 5,44,687 people are actively infected).“16 States have a recovery rate more than the national average,” Bhushan said.

The Health Ministry added that so far 1,81,90,000 tests for COVID had been conducted, including RT-PCR and rapid antigen tests.