It just took three days. COVID-19 cases in India cross 9 lakh after going past 8 lakh-mark. The surge has forced several states to impose fresh curbs. Maharashtra and Tamil Nadu remain the two worst-affected states in the country, accounting for 50 percent of the total active cases. The two states account for 1,54,134 of the country's 3,11,565 active cases.

The total number of confirmed cases rose to 9,06,752 on Tuesday and deaths climbed to 23,727, according to Union Health Ministry Data released today morning. The country witnessed a daily surge of 28,498 cases on Tuesday, the ministry said. 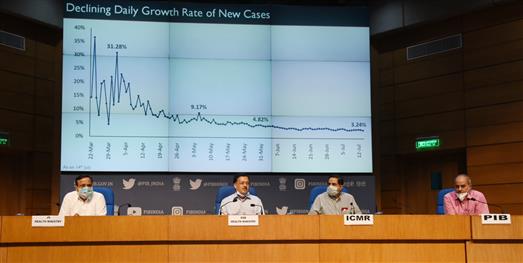 According to him, 22 states are doing more than 140 COVID-19 tests per day per million, in line with the comprehensive testing guidance note by the WHO. The official asked the remaining states and Union Territories to increase testing accordingly.

The health ministry's revelations have come amid nearly a dozen states re-imposing lockdown in selected areas for varying periods to check the surge in COVID-19. In Maharashtra, which has the highest number of cases at 2,67,665, a 10-day strict lockdown came into force from Monday in Pune and Pimpri-Chinchwad. A lockdown has been imposed in Osmanabad city till 19 July to break the chain of the viral spread. With some Haryana districts falling in the National Capital Region seeing a surge in COVID-19 cases in recent weeks, home minister Anil Vij indicated that the state may also impose stricter curbs in its worst-affected areas.

Assam had extended the two-week lockdown imposed from 28 June in Kamrup Metropolitan district, under which Guwahati falls, by a week till 19 July from 6 pm on Sunday. After Kashipur, a three-day lockdown has been imposed in Rudrapur and Bajpur in Udham Singh Nagar district of Uttarakhand with effect from midnight Monday due to a surge in COVID-19 cases, a senior state official said. The Uttar Pradesh government has decided to implement strict restrictions across the state on weekends to check the spread of coronavirus, joining Karnataka and Tamil Nadu which have been imposing Sunday lockdown.

Tamil Nadu had earlier imposed lockdown for varying periods in Chennai, Madurai and nearby regions. Tamil Nadu has the second highest number of cases in the country.

Bihar recorded a single-day spike of 1,432 COVID-19 cases on Tuesday, which pushed the total tally in the state to 18,853, the health department said.

"They have undergone successful toxicity studies in rats, mice and rabbits. Data was submitted to DCGI following which both these got clearance to start early phase human trials early this month. These candidates have got their sites ready and they are doing their clinical study on approximately 1,000 human volunteers each at different sites," he added.

"Compared to the global case, fatality rate it is significantly lower," he added.

Asked when Delhi's sero-survey findings will be made public, Bhushan said these surveys are fairly complex exercises and therefore by definition take time.

The health ministry assured that the moment sero-surveillance is complete and reviewed internally and shared with ICMR and other domain experts. After that it would be in public domain.