India's COVID-19 recoveries have crossed the historic peak of 1.5 million on Monday. Recovery of 15,35,743 patients has been made possible because of the policy of TESTING aggressively, TRACKING comprehensively & TREATING efficiently, Ministry of Health and Family Welfare claimed.  Better ambulance services, focus on Standard of Care and use of non-invasive oxygen have given the desired results. With the highest ever single day recoveries of 54,859 in the last 24 hours, the Recovery Rate amongst the COVID-19 patients has scaled another high of almost 70%. 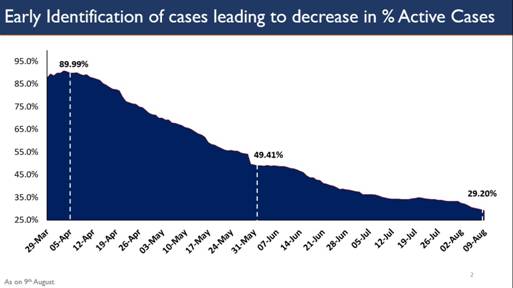 “The record high recoveries have ensured that the actual caseload of the country viz. the active cases has reduced and currently comprises only 28.66% of the total positive cases. India has posted more than 9 lakh recoveries than the active cases (6,34,945), the Ministry said in its official statement.

The coordinated efforts of Centre and State/UT governments on early detection through aggressive testing and efficient clinical management of hospitalized cases have shown results with continuously regressing Case Fatality Rate. It is 2%, as on date, and steadily declining. Early identification of cases has also led to steeply falling percentage active cases.

Early identification helps to ensure timely and prompt isolation of the mild and moderate cases and hospitalisation of the severe and critical cases thereby leading to effective management of cases.

It is important to note that the COVID-19 infection still remains concentrated in 10 States that contribute more than 80% of the new cases. The aggressive testing and tracking through house-to-house surveys and well implemented containment strategies and surveillance in these areas may lead to an initial increase in positive cases. However, well implemented strategies will ensure it reduces over time.

India has significantly ramped up testing for Covid-19 in recent weeks, but testing rates in the country still remain woefully low by global standards. Of the 20 countries with the highest number Covid-19 cases, only Pakistan, Mexico and Bangladesh have a lower number of tests per million populations.