As an Independence Day’s gift to Nation, Prime Minister Narendra Modi today announced the launch of the National Digital Health Mission (NDHM) and under the national scheme every Indian will get a health Identity Card. Announcing the launch of the health programme he said that the project will revolutionise healthcare in the country. 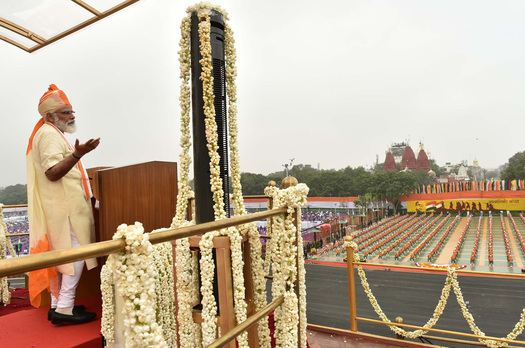 All Indians will be issued a health card that will have all their medical information, the Prime Minister said. “The details of your medical tests, illnesses, doctors’ prescriptions and medical reports will be on a single identity card,” he said, adding “The National Digital Health Mission will bring a new revolution in India’s health sector.”

In his Independence Day speech , Modi also said that three vaccines against the coronavirus were at different stages of clinical trials in India. “As soon as the scientists get the green signal, the vaccines will be ready for mass-production,” he added.

The Prime Minister appreciated health workers tackling Covid-19 for serving India’s citizens amid the raging coronavirus crisis. “In these extraordinary times, our doctors, nurses, paramedical staff, ambulance personnel, sweepers, policemen and are working round the clock to serve the nation despite great personal risk,” Modi said.

He also expressed sympathy with families who are suffering because of the coronavirus. Modi said that the resolve of 130 crore Indians will defeat the health crisis.

In his address to the nation, Modi also said that India was moving towards self-reliance despite the challenges created by the coronavirus crisis. “I am confident that India will realise this dream [of self-reliance,” the prime minister said. “I am confident of the abilities, confidence and potential of my fellow Indians. Once we decide to do something, we do not rest till we achieve that goal.”

The NDHM has been created to improve efficiency, effectiveness and transparency of the health services. The main driver of the Mission is the National Health Authority that brought the Ayushman Bharat scheme to fruition. Recently Union Cabinet had given in-principle approval to the Digital Health Mission.  The platform would have health IDs, personal health records, Digi Doctor and a health facility registry. Once it is rolled out, the platform would also expand to include e-pharmacy and telemedicine services, according to earlier media reports.

The digital health ecosystem would be a voluntary one and would be up to the user to enrol, hospitals and doctors to enrols. Health records of individuals could be accessed but only after authorisation. Users would also be able to link their Aadhaar with the health IDs. The IDs could be put to use at hospitals, pharmacies and labs across the country. The platform would also allow doctors to sign up and show their details and contact numbers. They would also be assigned a digital signature for prescriptions.