India has leaped across a significant milestone in its fight against COVID, today. According to Union Health Ministry, total cumulative recoveries have crossed 1 crore mark (10,016,859). The country’s  recoveries are the highest in the world. 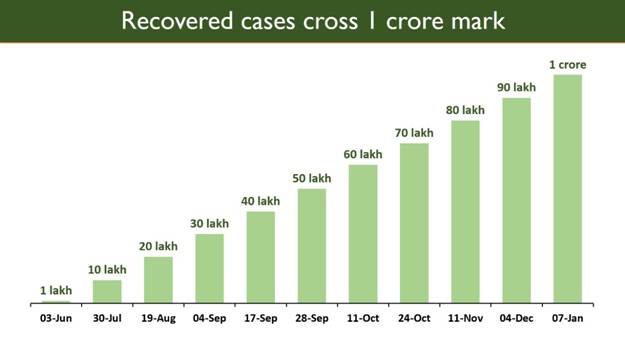 The Ministry said that 19,587 patients have recovered and discharged in the last 24 hours. The national Recovery Rate has further grown to 96.36%. The gap between active cases and recovered cases is continuously increasing (97,88,776).

According to the Ministry’s data, 17 States/UTs have weekly positivity Rate more than the National Average. Over 79 % of the new recovered cases are observed to be concentrated in 10 States/UTs . Kerala continues to lead with 5,110 single day recoveries followed by Maharashtra with 2,570 new recoveries. 83.88% of the new confirmed cases are from 10 States and UTs.

Kerala has reported 6,394 cases in the last 24 hours. Maharashtra recorded 4,382 new cases while Chhattisgarh has registered 1,050 new cases yesterday. 222 case fatalities have been reported in the past 24 hours. Of these, 67.57% are concentrated in six States/UTs.