Through effective strategy of containment including prompt tracing & tracking, aggressive and widespread testing, combined with standardized clinical management protocols, India has been successful in curbing the spread of the virus. 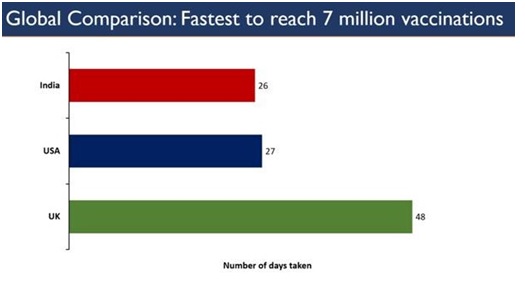 India achieved a significant milestone in its fight against the global pandemic as it became the fastest country in the world to achieve over 70 lakh vaccinations against Covid-19 in 26 days.

The USA took 27 days to reach this mark, whereas the UK achieved it in 48 days. India has also been the fastest to touch the 6 million mark a few days back.

The number of beneficiaries being vaccinated every day has shown a progressive increase.

7 States/UTs have reported less than 40% vaccinations of the registered healthcare workers (HCWs). Puducherry has recorded the lowest vaccination performance of 17.5%.

The country has recorded 1,42,562 active cases in the last 24 hours. The total positive cases of the country now comprise merely 1.31% of the total cases. India’s active cases per million population (104) is amongst the lowest in the world.

12,923 new confirmed cases were recorded in the last 24 hours in the country. 11,764 new recoveries were registered in the same period.

Currently India’s Recovery Rate has crossed 97.26% and is one of the highest in the world for countries with high caseload. As recoveries continue to outnumber new Covid 19 cases, total recovered cases have crossed 1.05 Cr (1,05,73,372).

The gap between active cases and recoveries keeps widening and presently stands at 1,04,30,810 with a considerable decline in mortality rate as more number of people are responding to medication and are recovering quickly.

83.20% of the new recovered cases are from 6 States. The state with highest number of recoveries is Kerala with 5,745 single day recoveries followed by Maharashtra with 2,421 new recoveries and Gujarat with 495 recoveries.

However new confirmed cases have been reported in the last 24 hours in the country and 85.11% of these new cases are concentrated in six States. Kerala is leading the number of new active cases with 5,980 cases followed by Maharashtra and Tamil Nadu with 3,451and 479 new cases, respectively.