The Union Health Ministry and ICMR have jointly written to all the States/UTs and urged them to ensure that the all symptomatic negative cases of RAT are mandatorily retested using the RT-PCR test. This is necessary to ensure that such symptomatic negative cases do not remain untested and do not spread the disease among their contacts, the Ministry said. 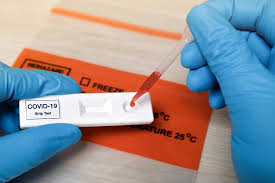 Union Health Ministry has noted that in some large States, symptomatic negative cases tested by Rapid Antigen Tests (RAT) are not being followed up by RT-PCT testing. The Guidelines of ICMR as well as the Ministry clearly state that the following two specific categories- all Symptomatic and Asymptomatic persons who went through RAT must necessarily be retested through RT-PCR tests.

“This will also ensure early detection and isolation/hospitalization of such false negatives. It has also been reiterated in the joint letter that while the RAT is being used to increase access and availability of testing in the field, RT-PCR remains the gold standard of COVID tests,” the Health Ministry added.

Centre has also urged the States/UTs to urgently establish a monitoring mechanism in every district (a designated officer or a team) and at the State level to follow up such cases. These teams shall analyse details of RAT conducted on a daily basis in the Districts and State and ensure that there are no delays in retesting of all symptomatic negative cases. The aim of States/UTs should be to ensure that no potentially positive case is missed out. They have also been advised to undertake an analysis on a regular basis to monitor the incidence of positives during the RT-PCR tests conducted as a follow up.

Meanwhile, India registered a record 95,735 coronavirus cases in 24 hours taking the total number of infections to over 44.65 lakh, the Ministry data showed today. The country also recorded the highest deaths in a day with 1,172 fatalities. The last recorded highest spike was on Tuesday when India registered 90,802 cases. There have been 72,939 recoveries in the last 24 hours - total recoveries stand at 34,71,783. There are over 9.19 lakh active cases in India, which is the second most affected nation due to the deadly virus in the world.

Delhi on Wednesday saw a record surge with more than 4,000 cases of coronavirus - the highest since the outbreak reached the national capital.

India has been reporting the highest number of daily coronavirus cases in the world for nearly a month, according to the World Health Organization data. After the United States and India, Brazil, Russia and Peru have the highest number of cases. US has over 63.59 lakh cases, around 19 lakh more infections than India.