Aggressive and widespread TESTING has essayed an important role in India’s fight against the COVID pandemic. India has scaled another peak- the cumulative tests have surpassed 5 crore today. 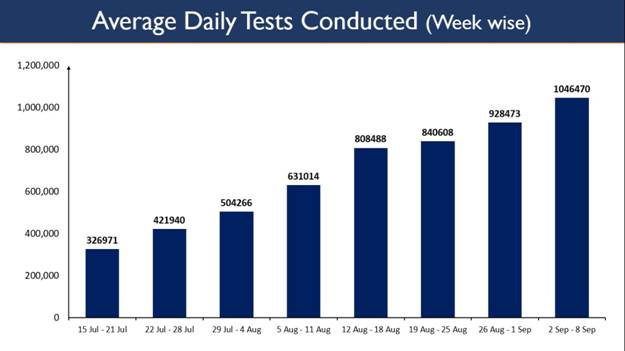 India has come a long way from conducting just one test from the lab at National Institute of Virology, Pune in January 2020 to 5,06,50,128 today. 10,98,621 tests were conducted in the last 24 hours testifying the enlarged testing capacity in the country.

The average daily tests conducted (week wise) are demonstrating a consistent increase. This has registered a 3.2 times expansion from third week of July (3,26,971) to first week of September (10,46,470).

In its Guidance Note on “Public Health Criteria to Adjust Public Health and Social Measures in the Context of COVID-19”, WHO has advised countries to conduct 140 tests per day per million population for comprehensive surveillance for suspect cases. The average week-on-week data for India shows a rising improvement on this front.

Expanding network of diagnostic labs has given a boost to Tests per Million. The TPM  have seen a sharp rise from  6396 on 1st of July to 36,703 as of today. The testing lab network in the country is continuously strengthened which as on today consists of 1668 labs in the country; 1035 labs in the government sector and 633 private labs. These include: