New COVID-19 Cases fall below 50,000 for the first time after nearly 3 months

India has leaped across several significant milestones in its fight against COVID-19. The new confirmed cases in the last 24 hours have fallen below 50,000 (46,790) for the first time in nearly three months, according to Union Health Ministry data. The new cases were 47,703 on 28th July. 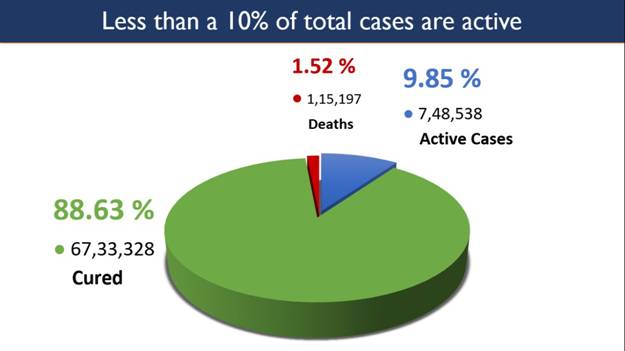 With a high number of COVID patients recovering every day and the sustained fall in the mortality rate, India’s steady trend of registering dipping active cases continues. In another achievement, the percentage active cases have fallen below 10%. The total positive cases of the country today are less than 7.5 lakh (7,48,538) and  comprise merely 9.85% of the total cases.

This is the result of collaborative, focussed and effective action by States/UTs under the Centre's strategy of comprehensive and high countrywide testing, prompt and effective surveillance and tracking, quick hospitalization and effective adherence of the Standard Treatment Protocol issued by the Union Government. This success also owes to the selfless service and dedication of doctors, paramedics, frontline workers and all other COVID-19 warriors across all parts of the country.

In the last 24 hours 69,720 patients have recovered and discharged. The national Recovery Rate has further grown to 88.63% and 78% of the new recovered cases are observed to be concentrated in 10 States/UTs. Maharashtra continues to lead with more than 15,000 single day recoveries followed by Karnataka with more than 8,000 recoveries.

Nearly 75% of the new confirmed cases are from 10 States and UTs. Maharashtra, Karnataka and Kerala contribute more than 5,000 to the new confirmed cases. In the past 24 hours 587 case fatalities have been reported. Of these, nearly 81% are concentrated in ten States/UTs. The deaths are below 600 for second consecutive day. Maharashtra has reported the maximum single day deaths (125 deaths).

India is the only country with the highest recoveries and continues to have one of the lowest fatality rates globally. Today it stands at 1.52%. These have in tandem resulted in consistent slide in the active cases.