India scales another peak with Recovery Rate leaping past 85%

Over 82,000 recoveries have been registered in the last 24 hours in the country while the number of new confirmed cases stands at 72,049, according to Union Health Ministry data.  India has crossed a significant milestone. The national recovery rate has jumped past 85% today with the continuous streak of high number of recovered cases being reported in the past few weeks. The recovered cases have exceeded the new confirmed again during the past 24 hours.  The total number of recoveries has touched 57,44,693. This has bolstered and sustained India’s global position at the country with the maximum number of recoveries. 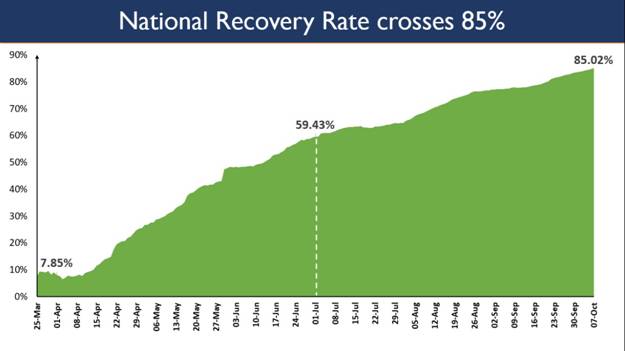 Out of 72,049 new cases,  10 States/UTs account for 78% of the new confirmed cases. Maharashtra continues to lead this tally. It has contributed more than 12,000 followed by Karnataka with nearly 10,000 cases.

In the past 24 hours, 986 deaths have been reported across the country and 10 States/UTs account for 83% of the deaths in the last 24 hours due to COVID. Of the new fatalities, Maharashtra reported more than 37% of deaths with 370 deaths followed by Karnataka with 91 deaths.

The months of October to December are time for festivities that witness gatherings of large number of people in specified locations for religious worship, fairs, rallies, exhibitions, cultural functions, processions etc. These events may last a day or a week or more. To prevent spread of COVID-19 infection, Ministry of Health and Family Welfare has released Standard Operating Procedures on preventive measures to contain spread of COVID-19 during the festivities.