Despite Extended Weekend, India Tests more than 10 lakh samples for 3 Successive Days and registers 74,442 new cases in the last 24 hours, according to Union Health Ministry Data. The country has exceeded 140 tests per day per million population as advised by the World Health Organisation by nearly 6 times. 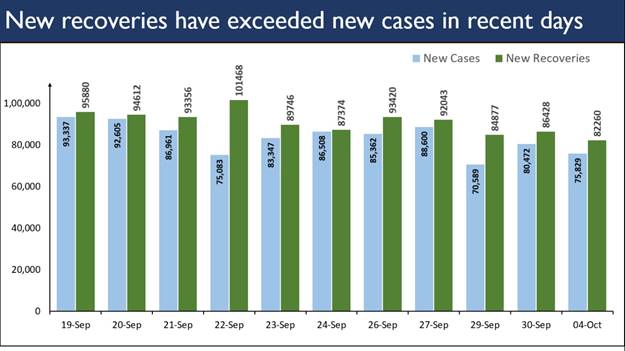 Several states and UTs have demonstrated better performance than the national average, the Ministry said. The surge in testing has been made possible by an equally speedy expansion in the testing lab network across the country. India has as on date 1,623 labs in the country with 1,022 labs in the government sector and 601 private labs, the Ministry added.

For the 13th day in an unbroken string, India has maintained its steady trend of clocking less than 10 lakh active cases. The number of active cases today is 9,37,625.  Despite the extended weekend, India has posted high daily testing numbers over Thursday-Friday-Saturday with 10,97,947, 11,32,675 and 11,42,131 tests respectively. There has been an exponential rise in India’s daily testing capacities. More than 15 lakhs tests can be conducted every day. An average of 11.5 lakh tests were done on a daily basis during the past ten days.

From merely one in January 2020, India’s total tests have crossed 7.89 crore so far. There has been a commensurate dip in the Positivity Rate. With progressively falling Positivity Rate, testing has worked as a highly effective tool to limit the spread of COVID-19 infection. Very high levels of testing lead to early identification, prompt isolation & effective treatment of COVID-19 cases. These have eventually resulted in a sustained low Fatality Rate.

India’s steady trend of posting high level of daily recoveries also continues with 82,260 recoveries registered in the last 24 hours in the country. In contrast, lesser number of new cases have been reported. The new recoveries have exceeded the new cases in the recent days.

India’s total recoveries have crossed 55 lakh (55,09,966) today. Higher number of single day recoveries is reflected in the continuous increase in the national recovery rate, which is at present 84.13%.

Being the leading State with highest number of active cases, Maharashtra has also contributed the highest number to the newly recovered cases followed by Karnataka and Andhra Pradesh.

Less than a 1000 deaths (940) have been registered in the last 24 hours. 80.53% of new reported fatalities are from 10 States and UTs. 29.57% of deaths reported yesterday are from Maharashtra with 278 deaths followed by Karnataka with 100 deaths. Maharashtra’s contribution to death toll has been on a decline.