India has demonstrated an exponential increase in the COVID-19 testing infrastructure since Jan 2020. The country’s testing capacities have multiplied manifold. More than 15 lakh samples can be tested every day.

India has performed remarkably on fulfilling WHO’s advise of 140 tests/day/ million population. In its Guidance Note on “Public Health Criteria to Adjust Public Health and Social Measures in the Context of COVID-19” WHO has advised this strategy for comprehensive surveillance for suspected cases. 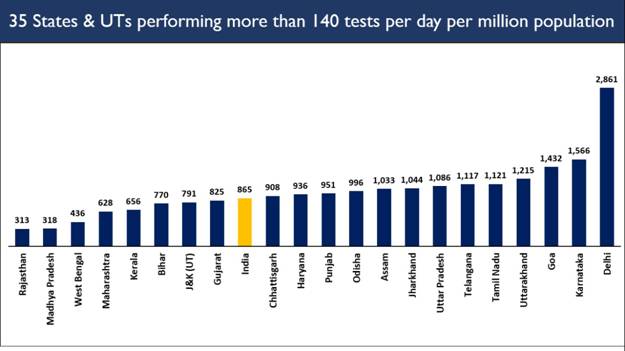 In another row of achievements, 35 States/UTs have exceeded the advised number of tests. The national average of tests per day per million population stands at 865, according to Union Health Ministry.

Nearly 12 lakh tests were conducted in the last 24 hours in the country. With 11,94,321 tests conducted in the last 24 hours, the cumulative tests have crossed 8.34 crore (8,34,65,975). As evidence has revealed, higher numbers of testing on a sustained basis have aided in bringing down the positivity rate. The sharp decline in national cumulative positivity rate has demonstrated that the rate of spread of infection is being contained.

Higher testing across wide regions leads to early identification of positive cases, prompt tracking through efficient surveillance and tracing, and timely & effective treatment in homes/facilities and in hospitals for the severe cases. These measures in tandem eventually lead to lower mortality rate.

Maintaining the spree of registering more recoveries than the new confirmed cases, 83,011 single day recoveries were registered in last 24 hours as against 78,524 new confirmed cases. The total recovered cases stand at 58,27,704. The gap between Recovered cases and Active cases has crossed 49 lakh (49,25,279). The Active Cases are less than 10 lakh for the 17th day in a row. Presently the active cases comprise merely 13.20% of the total positive cases of the country standing at 9,02,425. Higher number of recoveries has aided the national Recovery Rate to further improve to 85.25%.

75% of the new recovered cases are observed to be concentrated in 10 States/UTs. Maharashtra alone has contributed the maximum with more than 16,000 single day recovery. 78,524 new confirmed cases were recorded in last 24 hours. 79% of the new cases are from 10 States and UTs. Maharashtra continues to be the State reporting a very high number of new cases with more than 14,000 cases followed by Karnataka with nearly 11,000 cases. 971 case fatalities have been reported in the past 24 hours. Of these, nearly 82% are concentrated in ten State/UTs of Maharashtra, Karnataka, Tamil Nadu, West Bengal, Uttar Pradesh, Delhi, Andhra Pradesh, Punjab, Chhattisgarh, and Madhya Pradesh. More than 36% of new fatalities are reported are from Maharashtra (355 deaths).