India’s present active caseload (4,43,486) is 4.85% of the total Positive Cases, and has been sustained below the 5% mark, according to Union Health Ministry data. The Recovery Rate continues to be above 93% as 93.68% of all cases have recovered as of date. In the last 24 hours, the country registered 41,024 new recoveries in the last 24 hours taking the total recovered cases to 85,62,641, the Ministry said. 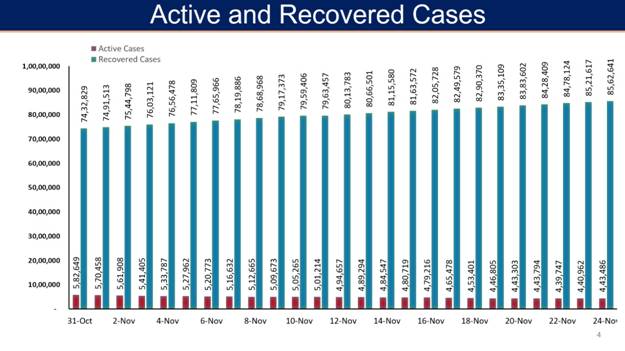 The gap between Recovered cases and Active cases is steadily increasing and presently stands at 81,19,155. In the last 24 hours, 44,059 persons were found infected with COVID. India has been registering less than 50,000 cases for the last 16 days, since 8th November. This assumes significance as several countries of the Western Hemisphere are witnessing a huge surge of new cases at the onset of winter.

15 States and UTs are reporting less than the national average of cases per million population(6,623).

74.95% of the 511 case fatalities reported in the past 24 hours are concentrated in Ten States/UTs.