"Difficulties in your life do not come to destroy you but to help you release the hidden potential and power". This quote by the late Dr APJ Abdul Kalam, a scientist and the 11th President of India, is the dictum for nurse Divya Sojan, who during the 11 years of her nursing career, has battled with tuberculosis (TB) thrice. She narrates her story to me in a candid talk recently. 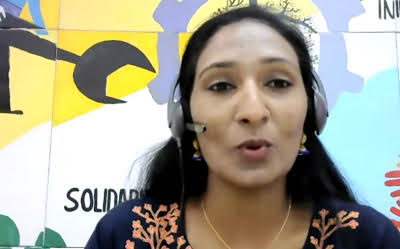 Divya, who hails from Kerala, finished her 4 year General Nursing and Midwifery course from PD Hinduja College of Nursing, Mumbai in 2009. She then started working at PD Hinduja National Hospital and Medical Research Centre, Mumbai. It was while working there that she was first diagnosed with TB in 2011. She recalls , "During a tiring night shift in 2011, I felt a shooting pain in my chest. An X-ray showed pleural effusion and a patch over the left upper zone of my lungs. I was started on a 4 drug treatment regimen for drug-sensitive TB. Even though I initially suffered from nausea and joint pains, I did not have any severe side effects and recovered completely after 6 months. I did not even feel like I was having TB. I was staying in a hostel and my friends took care of everything for me".

A year later, she got infected with H1N1 virus while taking care of a swine flu patient in the same hospital.

"I was wearing a mask and had just been there for a few minutes to help and the patient's ventilator tubing got disconnected. The very next day I developed flu symptoms and tested positive for swine flu. Five of us were there with the patient but only I got infected, perhaps because of my low immunity."

In 2014, Divya left her Mumbai job to do her Masters in Neuroscience at India's top medical institution (All India Institute of Medical Sciences (AIIMS) Delhi). It was while studying in Delhi that one day she suddenly felt a pain in her chest - the kind of pain she had had earlier. An X-ray revealed a patch over the left upper zone of her lungs. After a CT scan she was started on treatment for drug-sensitive TB, for a second time. This time she had to take streptomycin injections also. Due to mild pleural effusion and breathing difficulty she was hospitalised in AIIMS for one month.

Even though she  was struggling, she went back to her studies after getting discharged from the hospital and finished her treatment in eight months." In 2016, after finishing her post-graduation, Divya got a job as a nursing officer in AIIMS, which was indeed a matter of pride for her.

Last year (in 2019) because of Delhi's infamous air pollution (and also because of her own ambitions) Divya thought of moving out and try for better job opportunities abroad. In the process, she got a routine chest X-ray done. To her surprise the X-ray showed consolidation over the upper and middle zone of her left lung. Bronchoscopy and molecular diagnostic (CB-NAAT) test revealed that she had rifampicin-resistant TB. And thus began her treatment for multi-drug resistant TB (MDR-TB).

"I was totally devastated and dreaded the long treatment regimen that was to follow. From day one of the treatment life became miserable in every sense. I was taking 22 tablets plus kanamycin injection daily. I suffered from severe nausea, vomiting and frequent syncope (fainting or passing out). I could not retain any food, not even water. Within one month I had lost 8kgs of weight-from 56kg to 48kg."

It became impossible for Divya to continue with her hospital duties while adhering to the toxic and debilitating treatment. So she decided to take leave, went to her parents' home in Kerala and take treatment there (from the Directly Observed Treatment Shortcourse or DOTS centre). While she got all the love and care from her family, there seemed to be no end to her medical woes. In the 3rd month of her treatment she suffered from blurring of vision - another side effect of the medicines.

"I had sleepless nights, crying spells and emotional breakdowns. Neither me nor my family could figure out what was happening to me. There was a lot of mental and physical trauma. Life was hopeless and miserable. Many times I thought that death was better than this suffering."

On top of this, she received a memo from her hospital in Delhi that her sick leave had not been sanctioned for any further period. Although Divya had planned to stay in Kerala for the whole duration of her treatment, she had to return to Delhi after five months to join her duties.

Divya is all praises for the TB care and control programme in her home state of Kerala. "The way the doctors, nurses and coordinators at the DOTS centre spoke and behaved with me really touched my life. What makes a huge difference is that the Kerala TB cell works with their hearts and not just with their brains."

Divya was finally cured of MDR-TB in April 2020, but not without a permanent mild hearing and vision disability. She attributes the successful completion of her arduous treatment to the support she got from her family and friends throughout her difficult days. "My whole family was a big support and they held me close when I had emotional breakdowns. It was only because of my family and friends that I did not go into depression."

Divya's story is a grim reminder of the crucial need to protect our nurses and other healthcare workers. They play a vital role in providing health services, even in difficult times like the current pandemic. The World Health Organization (WHO) has designated 2020 as the International Year of the Nurse and the Midwife "to celebrate the work of nurses and midwives, highlight the challenging conditions they often face, and advocate for increased investments in the nursing and midwifery workforce". WHO has also highlighted that nurses are in the forefront of the fight against COVID-19. Yet they face a lot of stigma in many places.

Divya appeals for giving importance to the well-being of all healthcare workers. “Healthcare professionals are always at higher risk of contracting workplace infection as they are in constant contact with patients. They deserve to get vaccinations, leave when they are sick, periodic check ups to screen for TB and other infectious diseases and easy access to treatment,” she said.

Getting paid sick leave from work is another issue. Divya was sanctioned leave only for 5 months during her 9 months' long MDR-TB treatment. "I had to join work putting my health at risk of opportunistic infections. Mental health issues were just ignored and I skipped my tablets during night shifts. Leave-rules for TB patients need to be amended and implemented".

Divya strongly feels that treatment literacy of the TB patient is very important. "Often the patient does not even know why and for how long the treatment will last, and why treatment adherence is important. Mental health of TB patients is another area which needs more attention.”

Her tryst with TB has made Divya a better and stronger human being. "From my personal experiences, I know how it feels being hopeless and worthless. Today, as a nurse I can better understand the pain of my patients. I have understood how important it is to talk with love and care with each patient, to support and provide them information about their treatment.”

Shobha Shukla is the award-winning founding Managing Editor of CNS (Citizen News Service) and is a feminist, health and development justice advocate. She is also  Coordinator of Asia Pacific Media Network to end TB & tobacco and prevent NCDs (APCAT Media). Follow her on Twitter @shobha1shukla