Mucormycosis, a bigger challenge than Covid-19 in Delhi for now

Mucormycosis or black fungus has emerged as a bigger challenge than Covid-19 in the capital for now. Currently, there are far more active black fungus cases than Covid-positive cases. These are mostly patients who took steroids without a doctor’s prescription and used oxygen cylinders at home while they were infected with the virus. 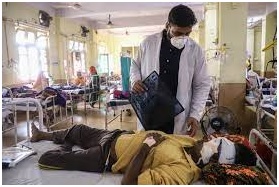 Black fungus, which is usually found in the nasal, oral and orbital cavity, invaded the brain of some patients and turned into cerebral fungus, thereby causing their death.

According to an official document accessed by TOI, Delhi had 952 active cases of black fungus as compared to 833 active Covid-19 cases on July 6. While 402 patients were admitted in private hospitals, 302 were in Delhi government hospitals and the rest in central government hospitals.

Delhi government had flagged a shortage of injections needed to treat mucormycosis. The total requirement of amphotericin-B is around 1.5 lakh as each patient generally needs five injections every day. Usually, a patient needs 120-150 injections before full recovery, which takes over a month. The treatment is very expensive as each injection costs Rs 6,000-7,000.

A man whose 58-year-old father was admitted with black fungus patch in the eyes to Lok Nayak Hospital, where a dedicated mucormycosis treatment facility has been created by Delhi government, said he could not survive for more than a fortnight.

“It developed into cerebral fungus, which resulted in his death. He had recovered from Covid-19 around a month ago. We thought we were past the crisis situation, but soon he developed painful swelling in the eyes after which we rushed him to the hospital,” said the man.

Nearly 1,656 mucormycosis cases have been reported in Delhi so far. However, in the past couple of weeks, the cases have stabilised. Compared with 10-15 cases being reported every day earlier, now only a couple of cases are being reported at Lok Nayak Hospital.

A doctor handling such cases at a government hospital said most patients reported black fungus 7-15 days after recovering from Covid-19. “Among them, many took oxygen at home from cylinders procured from the open market, many of which are filled with non-medical grade oxygen. Several patients had a history of excessive steroids consumption, often without a doctor’s advice,” added the doctor.

“The symptoms include swelling around the eyes and face, black discolouration around nose and eyes, nasal congestion, fever, headache, cough, chest pain and shortness of breath. Patients who have recovered from Covid-19 must immediately see a doctor if they develop such symptoms,” said Dr Arun Gupta, a member of Delhi government’sCovid-19 expert committee.