State governments will not have to bear any cost towards vaccinating 3 crore Health Workers and Front Line Workers: PM

Prime Minister Narendra Modi today announced that State governments will not have to bear any cost towards vaccinating these 3 crore people in the first stage as Centre will bear this cost. He announced this while chairing a high level meeting with Chief Ministers and Administrators of all States and Union Territories to review the status and preparedness for COVID-19 vaccination. 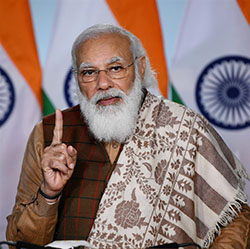 He said that the priority of vaccination has been decided as per advice of the experts and scientific community after consultation with the States. Health workers, from both government and private sector, will be the first ones to receive the vaccine. Along with them, Safai Karmacharis, other Front Line Workers, police and paramilitary, Home Guards, Disaster Management Volunteers and other jawans in Civil Defence, and Revenue Officials associated with containment and surveillance, will also also receive the vaccine in the first stage. The total number of such personnel is around 3 crore.

Prime Minister said that the country is in a decisive phase of this fight, with the start of the world’s biggest vaccination campaign from 16th January. He underlined that it's a matter of pride that both the vaccines for which Emergency Use Authorization has been given are made in India. He highlighted that both the approved vaccines are highly cost effective in comparison to other vaccines from across the world, adding that India would have faced great difficulty if it would have had to depend on foreign vaccines.

In the second stage, those above 50 years of age, and those below 50 years of age with comorbidities or with high risk of infection, will be vaccinated. Preparation for infrastructure and logistics has been done with all States and UTs, the Prime Minister said, adding that dry runs for vaccination has also been done across the country. He said that our new preparations and SOPs for COVID have to be linked up with our old experiences of running universal immunization programmes and conducting elections throughout the country. He noted that the booth level strategy used for elections needs to be used here as well.

Prime Minister remarked that the most important factor in this vaccination drive is identification and monitoring of those who need to be vaccinated. For this, Co-Win digital platform has been created. With the help of Aadhaar, beneficiaries will be identified as well as timely second dosage will be ensured. Prime Minister underlined the significance of ensuring that real time data related to vaccination gets uploaded on Co-Win. After a person receives the first dose of vaccination, Co-Win will immediately generate a digital vaccination certificate. This certificate will also act as a reminder for the second dose, after which, a final certificate will be given.

The Chief Ministers expressed happiness at the rollout of vaccination. They discussed some issues and concerns about vaccines, which were clarified in the meeting. Union Health Secretary gave a presentation on preparedness for the vaccination drive. He outlined that vaccination would be based on Jan Bhagidari, and there would be orderly and smooth implementation without compromising on the existing healthcare setup. He also gave an overview of logistics preparedness for the drive.