It was 7th November when Daily New Cases last crossed the 50K threshold. Since last eight continuous days, India has reported less than 50,000 new daily cases.  Only 41,100 people were found to be COVID positive in India, in the last 24 hours. Observation and promotion of Prime Minister’s COVID Appropriate Behavior by different population groups has brought down the rate of spread of the virus in India while other countries like America see a spike in daily numbers. 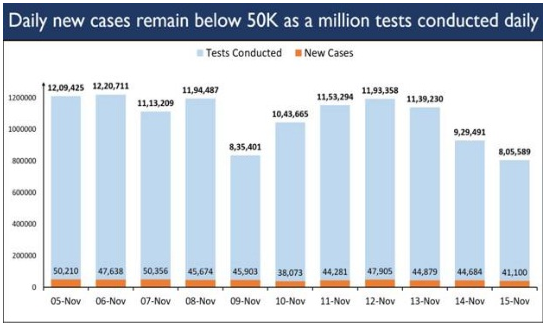 The active caseload of India has shrunk considerably and presently is below 5 lakhs. At present India’s active caseload stands at 4,79,216  which is just 5.44% of  Total Positive Cases. The recovery rate has seen a boost and there have been 42,156 new recoveries in last 24 hours. As recoveries continue to outnumber new cases, total recovered cases stand at 82, 05,728 and the Recovery Rate has improved to 93.09%.

The gap between active cases and recoveries keeps widening and presently stands at 77, 26,512 with a considerable decline in mortality rate as more number of people are responding to medication and are recovering quickly.

79.91% of the new recovered cases in the past 24 hours are from 10 States/UTs. The state with highest number of recoveries is Delhi with 7,117 single day recoveries followed by Kerala with 6,793 and West Bengal with 4,479 recoveries.

However new confirmed cases have been reported in the last 24 hours in the country and 82.87% of these new cases are concentrated in ten States/UT. Delhi is leading the number of new active cases with 7,340 cases followed by Kerala with 6,357 cases and Maharashtra with 4,237 new cases.